If you’ve been even halfway minding the news, you’ve seen the dire consequences of climate change: rising seas, more frequent flooding and droughts and hotter temperatures already in play around the world.

Climate change policy strategists acknowledge the steep but necessary pricetag for reducing greenhouse gases, the chief culprit. But there are hidden costs besides, and a University of South Carolina political geographer says we must account for those, as well, in the global push to go green. 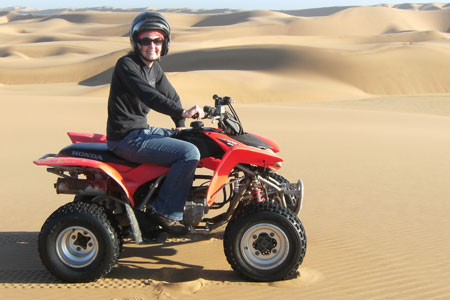 Meredith DeBoom has conducted extensive research on the geopolitics and consequences of Chinese-backed uranium mining in Namibia. The country's Rössing uranium mine, pictured at top of page, is majority-owned by China.

“Africans have contributed just 3 percent of historical carbon dioxide emissions, but scientists project they will experience some of the worst effects of climate change,” says Meredith DeBoom, an assistant professor of geography who studies the intersection of geopolitics, mining and development. Much of her recent research has focused on Chinese investments in uranium mining in the southwest African country of Namibia.

“If China uses nuclear energy to phase out coal, the global carbon reduction benefits could be significant,” DeBoom wrote in a recent op-ed piece for The Washington Post. But she adds that Namibians who live near the uranium mines that will fuel China’s expansive use of nuclear energy are negatively affected by the intensive water demands of the mines. They also experience negative health outcomes associated with radiation and chemical exposure from mining operations.

“When we think about green energy technologies, we're often thinking of windmills and solar panels and nuclear reactors,” DeBoom says. “We don’t necessarily think of the extractive processes that underlay them and how they affect those living nearby.”

Green technologies such as wind turbines and electric cars reduce the world’s carbon footprint, for example, but themselves require large quantities of copper wiring. Copper mining, according to the Environmental Protection Agency, produces some of the largest amounts of mine processing waste in the United States.

If you want to understand green energy transitions, you can't just look at who is emitting the carbon and who is implementing the technologies.

DeBoom came to South Carolina in 2018 with an extensive background in environmental policy work at the U.S. Department of Transportation, the Environmental Protection Agency and the State Department. It was with that latter agency that DeBoom first went to Namibia and began learning more about the geopolitics of uranium mining.

She uses her research as the foundation for teaching undergraduate political geography courses, which help students to understand the larger scope of climate change policy.

“If you want to understand green energy transitions, you can't just look at who is emitting the carbon and who is implementing the technologies,” she says. “You have to look at where all those raw materials are sourced from and how benefits and costs are distributed along those commodity chains. It's a great way to illustrate for students the value of geographic education and the value of thinking across multiple scales at the same time.”

“We have the ability to go out to the field and interview people. People in the State Department don't have time to go out and interview hundreds of people in rural Namibia,” she says. “I think it's a really fruitful partnership in that we can provide the long term analysis and the data. And then the challenge is for us to not just publish that in academic journals, but also to translate those findings to a broader audience so that they can actually be used by policymakers.”

What’s next on DeBoom’s radar? She has a new project underway looking at marine phosphate mining for the fertilizer industry and lithium iron phophate batteries, which are used in elecric vehicles. That research likely will take her back to southern Africa.