On Aug. 1, Jack Sadle became the first University of South Carolina student to graduate with a Bachelor of Science in Cyber Intelligence — a field where issues of cyber and national security meet.

“When people think cyber warfare, they think, ‘Oh, the bad guy is going to get into my email,’” Sadle says. “But a lot of it has to do more with critical infrastructure.”

A former 25 Bravo IT Specialist in the Army Reserves, Sadle says his education and training have given him a broader understanding of cyber warfare.

While doing an internship with the Army Cyber Institute at West Point, Sadle participated in a project that examined potential vulnerabilities in military port cities, including Charleston. He studied the real-world consequences of a digital ambush.

“Cyber warfare might be something as simple as taking a school system offline,” Sadle says. “And if something goes down with the school system, then all the people that man the jets and the people who work on the base have to go get their kids from school. So, there’s a one- or two-hour delay in defense.”

Understanding those interactions between people and technology is vital to national security, and it’s a key purpose of the new academic program. Sadle says he’s talked with military, business and government leaders who “all describe this horrible miscommunication between the people on the keyboards, who know what they’re doing in the cyberspace, and the people making policy, who don’t know what’s happening on the keyboards.”

Attacks on schools, hospitals, transit systems and banks are the security challenges of the future. Cyber intelligence equips graduates not only with the technological know-how but also the skills to analyze data and predict when and why cyber-attacks may happen.

“I think cyber intelligence gives us a leg up in the next battle, which is where military intelligence comes into it," Sadle says.

A part of the Walker Institute in the College of Arts and Sciences, the cyber intelligence program offers classes in history, psychology, political science, geography and foreign languages, with a focus on how these social and communications skills can be applied in the technical realm. The College of Engineering and Computing supports the program with technical courses focusing on cybersecurity and information technology.

Senior Caroline Boozer is working toward a cyber intelligence degree along with her computer science bachelor’s and cyber security certification.

“I feel like I'm more well-rounded with the cyber intelligence degree,” Boozer says. “It adds to my foundation and passion for computer science, and this mix of overlapping skills will give me a real edge in the workforce.”

I think cyber intelligence gives us a leg up in the next battle, which is where military intelligence comes into it.

While the cyber intelligence requirements are not as technical as those for computer science, the program has enhanced her understanding of global studies in relation to the cyber world, which will help reach her goal of working for an agency like the FBI or Interpol.

“As a computer science student, you don’t really get that side of things. You’re not learning about the world and how this affects people,” she says.

Jorge Crichigno, a professor of Integrated Information Technology at UofSC who taught both Sadle and Boozer, says cyber intelligence offers students flexibility to pursue their specific interests and strengths. 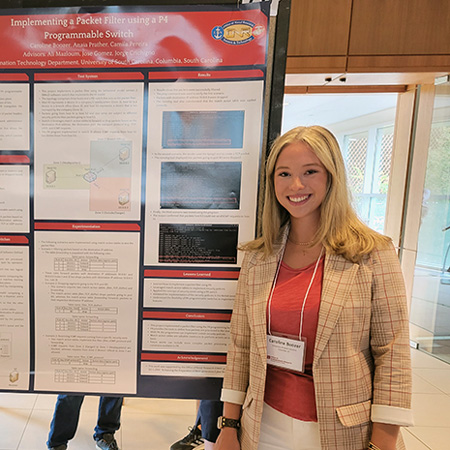 “I feel like I'm more well-rounded with the cyber intelligence degree. It adds to my foundation and passion for computer science, and this mix of overlapping skills will give me a real edge in the workforce.”  — Caroline Boozer

This summer under Crichigno’s direction, Boozer worked on a research project sponsored by the Office of Naval Research. Using a programming language called “P4,” she developed a specialized filter for a software switch, an important component of networking systems.

This upgrade would give organizations more control over their network security — an improvement that could prevent the kind of attack Sadle studied in his West Point internship.

To establish policies and infrastructure for a more secure future, the field will need students like Boozer, who aim to become politicians, cyber-lawyers and leaders in the private sector.

“This is where we’re heading. We’re heading toward the cyber world — the cyber war, maybe — and people are trying to learn the most about what they can,” Boozer says.

With a clear application to military defense, the cyber intelligence program also has been popular with ROTC cadets and military-track students like Sadle.

A newly commissioned second lieutenant in the U.S. Army Reserves, Sadle will train as an officer in the coming months. As he anticipates his career in the military, he sees a future that is not altogether dissimilar from the past.

“This is a problem that 50 years ago would have looked totally different,” Sadle says. “But you know, we’ve had warfare since the dawn of time and it is constantly evolving. Cyber intelligence is a critical component of the next phase of that evolution.”