Over a 50+ year theatre career, Distinguished Professor Emeritus Jim O’Connor has built up an inspiring array of accomplishments.  An esteemed director and teacher, O’Connor has been at the helm of well over 100 productions around the country, chaired thriving theatre departments at two universities (Purdue and South Carolina), and contributed to the career successes of countless theatre artists.  Without question, Jim O’Connor has done – and seen -- it all in the world of theatre.

And he’s got the playbills to prove it – or, we should say, had.

That’s because O’Connor and fellow South Carolina theatre professor Erica Tobolski recently donated their massive collection of more than 900 theatre playbills to the University of South Carolina’s Thomas Cooper Library.  The Jim O’Connor/Erica Tobolski Theatre Program Collection contains playbills that date to the mid-1950s, representing shows that span the gamut from Broadway to regional to collegiate productions.  One could think of it as a hands-on guide through the evolution of theatre since the mid-twentieth century.  For O’Connor, however, the collection’s significance is much more personal.

“It’s been like an autobiography,” O’Connor says.  “You know, ‘I can remember this show and oh, God, was it good,’ or ‘Boy, did I love directing that one.’  It took me probably six months to get through them.”

In addition to cataloguing his own history in professional theatre, O’Connor says the collection chronicles the careers of some of the most celebrated names in the industry.

“You have kind of a tracking of all the major actors and directors in there,” he says, “from John Geilgud and Ralph Richards to [Robert] DeNiro doing The Merchant of Venice.  I have the program of The Royal Family with Eva La Gallienne [in 1975] and Rosemary Harris was playing the daughter, and then I have another program from twenty years later of the same show with Rosemary Harris playing the grandmother.”

He smiles broadly as he remembers a particularly memorable moment involving the legendary Harris.  “She was just brilliant in The Royal Family, and when they were doing the curtain call, she was way up stage right and her back was leaning on a piano.  The applause was building and then she turned around and looked at us, very timidly walked down center, and did a bow where her head went all the way to the floor.  And I thought, ‘I’ll never see anything that theatrical in my life again!’”

O’Connor says his hope is for this initial donation to be just the beginning of an even broader collection.  He’s started the ball rolling by reaching out to colleagues around the country and has already secured promises for donations of several hundred additional playbills.

“We had a modest collection of playbills already, but this collection provided us with an opportunity to increase our holdings,” says Elizabeth Sudduth, Director of South Carolina’s Irvin Department of Rare Books & Special Collections. “Collecting materials that our faculty need to support the research and teaching mission of the university is key, but, at the same time, we recognize that we are building these collections for the next generation of faculty and students.”

Suddeth says work has begun to catalogue the contents of the collection and make it available far outside South Carolina’s boundaries.  “We’re looking at how we can best make the collection widely accessible [online] and what information to include in the bibliographic record.” she says, “That’s what we do.  We’re ready and excited to make these materials available.”

The information to be derived from the collection is wide-ranging.  In addition to containing the basics of cast and crew names, many of the programs also include professional biographies, historical information about specific theatres, show photos and graphics, advertisements and a host of other elements that researchers may find illuminating.  Even the changing layouts of the playbills themselves can prove historically significant.

“I’ve always been interested in looking at images from the past," says Tobolski, "even everyday things like the Sears catalog or pictures of city streets. At the time these were not extraordinary, but now they offer a glimpse into the culture and values of a society. I hope that the collection provides this opportunity for future scholars of both history and theatre.”

Whatever benefits this initial treasure trove of memorabilia may reap,  the collection’s namesakes both agree that its worth starts simply with a lifetime of love for the theatre.

“I just love sitting there in the dark and seeing what someone else is passionate about,” says O'Connor.  “It’s sheer joy.”

That’s not to say that he’s a fan of every show he’s ever seen, but he says that’s just part of the fun.

“It’s kind of junky behavior,” O’Connor says of his approach to theatre-going.  “You get a good shot of something and you remember that, and you can get through a lot of bad ones looking for that next good one.  And that’s kind of what I’ve survived on.”

If you have playbills you would like to add to the growing collection, contact Elizabeth Sudduth at esudduth@mailbox.sc.edu or Kevin Bush with the Department of Theatre and Dance at bushk@mailbox.sc.edu. 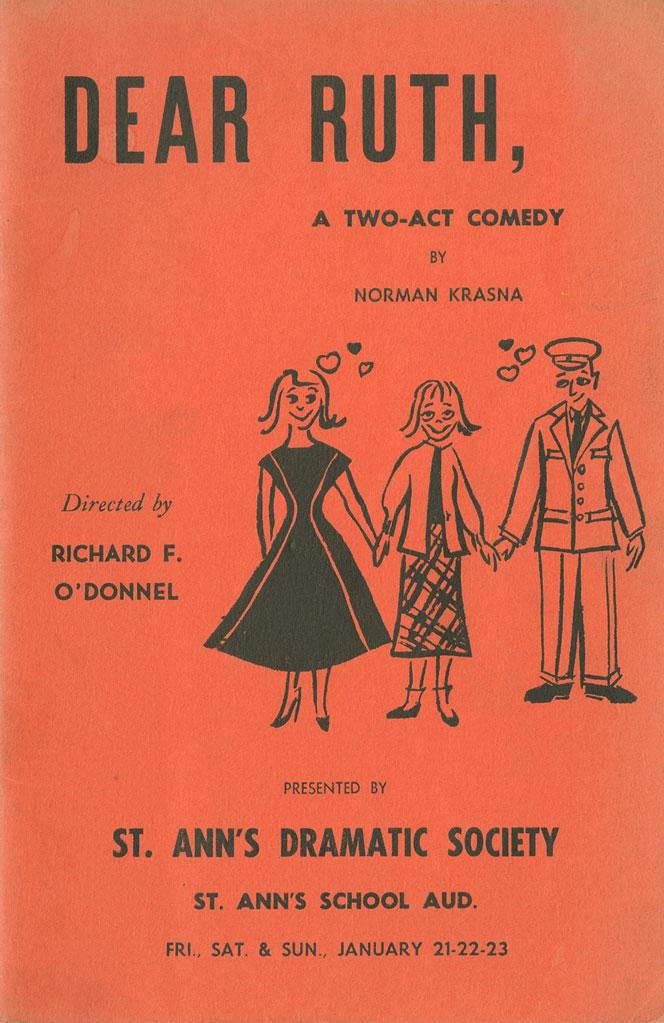 The Jim O'Connor/Erica Tobolski Theatre Program Collection contains over 900 theatre playbills from productions all over the country.  Whether local, regional, collegiate, or Broadway productions, it traces American theatre history over the last 60 years.  Here is just a sampling of playbill covers from the collection.