All 37 of The Bard’s plays (and maybe a sonnet or two) get the spotlight in this irreverent, unpredictable comedy.  One of the world’s most produced plays, Complete Works will have Shakespeare lovers and haters alike rolling in the aisles (and maybe rolling their eyes) as every timeless tale is frantically recreated by three madcap thespians in tights in a fast and furious hour-and-a-half!

“Shakespeare as it was back in the Bard’s day: bawdy, irreverent, sublimely entertaining.” -- The Miami Herald 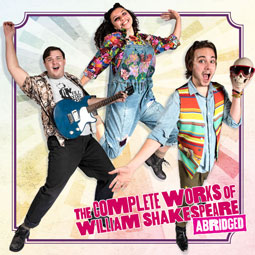