In his father’s footsteps

Growing up, Michael Corso knew he wanted to be in the medical field; after all, he grew up in the medical profession watching his father provide care to patients, but his path toward medical school took some unusual turns along with way.

“I knew the person that my father was through medicine,” Michael says, “and I knew I wanted to embody that for myself.”

His father, Steve Corso, M.D., is a 1988 graduate of the University of South Carolina School of Medicine Columbia. He is board certified in internal medicine, hematology and oncology and practices with Medical Group of the Carolinas at Spartanburg Regional Medical Center in Spartanburg, South Carolina. He was honored as the Distinguished Physician Alumni in 2014, and currently serves as president for the School of Medicine Alumni Association.

Michael earned his bachelor’s degree in psychology from the University of South Carolina in 2010. Before entering medical school in 2014, Michael trained as an embryologist with Advanced Fertility and Reproductive Endocrinology Institute. He completed his studies with the School of Medicine in December 2019 and has begun his residency in family medicine at McLeod Regional Medical Center in Florence, South Carolina.

While he graduated magna cum laude with his bachelor’s degree, Michael struggled with standardized testing and took the MCAT a few times before earning a score that would earn him acceptance to medical school. Following his second year as a medical student, Michael found himself challenged by the Step 1 exam, the first part of the United States Medical Licensing Examination, which assesses whether medical school students or graduates can apply important concepts of the foundational sciences fundamental to the practice of medicine. That may have delayed his target graduation, but it did not deter his dedication and determination to focus even more on attaining his goal.

“I was confident that I was meant to help people,” he says, “and that’s why I got into this in the first place.”

Because of his perseverance, Michael has learned to trust that things will work out as they should where his future is concerned. “I didn’t originally plan to go into family medicine, and it wasn’t what I thought I wanted to match into,” he says. “I was open to all types of medicine and every aspect of the clinical rotations. With the residency at McLeod, I have found everything that I am interested in and that involves all aspects of patient care.”

Even Michael’s father is amazed how physicians find their way into the right field, and he is proud of Michael for not attempting to ‘put a square peg into a round hole’ as he describes it. “Some people are unhappy in their career paths because they went into a particular field or specialty for the wrong reason,” he says. “Michael has been flexible and willing to go in another direction. When you are open to where life may lead you or where God may lead you, you find yourself as a successful physician and a much happier person.”

In looking back over his own career, Michael’s father still wonders how he came to find such a perfect career. “As a child I always wanted to be a physician and that was a focus throughout high school and college,” he says.

He believes his mentors in medical school led him to specialize in cancer. “I never had a family member who had cancer,” he recalls, “so I wasn’t inspired because of a personal reason.”

He found himself moved by a lecture given by renowned faculty member Dr. O’Neill Barrett and an excerpt from Sir Arthur Conan Doyle’s novels about Sherlock Holmes. “There were a couple moments in my career that I realized being a physician was like being a detective, looking for clues and solving problems. Hematology and oncology provided an opportunity to work with patients facing a challenge.”

He also credits his spiritual faith in his medical journey. “Particularly in oncology, the disease makes people realize they are mortal, and their life could be shortened early. Ministry is an integral part of what I do,” he says.

Michael is certainly grateful for the support from his Gamecock family – in addition to his father attending UofSC for both undergrad and medical school, his mother graduated from the UofSC School of Nursing in 1986; his two brothers also studied at UofSC - David attended UofSC Honors College and earned a master’s degree in education; Matthew earned a bachelor’s degree in criminal justice from UofSC and just recently retired from the United States Marine Corps as a captain.

Part of Michael’s decision to attend the School of Medicine Columbia hinged on the fact that he was already at UofSC and had spent six years working at Prisma Health Richland as a patient transporter.

“I did look at other options,” Michael says, “and the School of Medicine in Greenville had recently opened. I ultimately wanted to stay because I was already working with physicians who would be teaching me. That gave me a chance to be immersed in what the UofSC School of Medicine would offer in terms of faculty.”

While Michael’s father is delighted with his son’s decision to follow him into medicine, he says as parents, he and his wife tried to refrain from encouraging or suggesting that any of their children do anything other than what they wanted to do.

“I’m pleased he followed this path, but also a bit anxious because when I look back at my own journey, medicine is a tough road,” he says. “Med school, residency, learning to develop your craft, and trying to help people who are in some of their most challenging times can be difficult. Michael has a wonderful way with people and watching him develop and mature through school, he is the type of physician that I would want by my bedside.”

Michael agrees that his father never pushed him to go into medicine. “I did not do this because my dad told me to be a physician,” he says. “I would tell students to be realistic and recognize that it is not going to be easy. You will learn something about yourself by pushing through. I chose the joys and the hardships and am looking forward to what this journey will bring.” 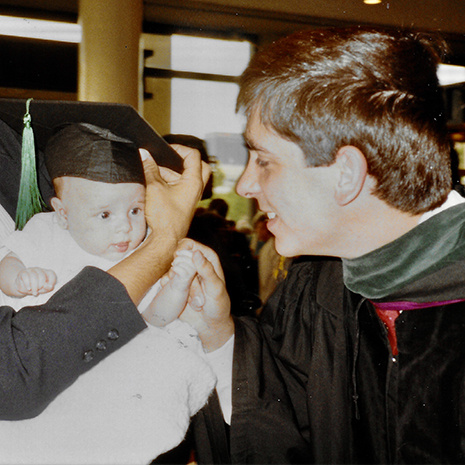