Jason Thieling, M.D., a member of the class of 2006, and Dan Gilstrap, M.D., a member of the class of 2007, were classmates at the University of South Carolina School of Medicine Columbia. Years later, they find themselves as colleagues working together at Duke Health and the Duke University School of Medicine. More significantly, as the number of positive coronavirus cases continue to rise, their roles have placed them on the front lines of the COVID-19 pandemic.

“A runny nose isn’t a runny nose anymore,” he says. “What we would have typically thought we would see in February or March to be the flu or an upper respiratory problem comes with a whole myriad of concerns. We have become mini epidemiologists in the ER.”

It is Gilstrap’s department that treats the most serious COVID-19 infected patients. As medical director for the medical intensive care unit at Duke Health. Gilstrap has extensive training in pulmonology. He completed his residency in internal medicine at Johns Hopkins University School of Medicine in 2010 and his fellowship in pulmonary and critical care at the Duke University School of Medicine in 2013.

“Patients with viral pneumonia come to the MICU for treatment,” he says. “And with the influx of patients, we have helped other ICUs that don’t normally take care of these patients. Because of our strong patient management program, we get referrals from around the nation, and we’re focusing on how we help other areas provide the same level of care.”

Much of their time has been spent preparing their teams for patient care protocols as the number of patients increased. “Our areas are critically linked between the emergency department and intensive care and the type of care we provide,” says Gilstrap. “It was beneficial for us to have a relationship right out of the box at the onset of the influx of patients.”

Thieling and Gilstrap also joined efforts not only at the patient-care level but on a system-wide level as well. “We had to prepare for appropriate staffing, perhaps using ambulatory surgery centers and training for treatment procedures,” says Thieling.

“We focused on growing multiple new ICUs as needed,” Gilstrap says, “with forty intensivists coming together. We have over prepared, and with a second surge possible, we are prepared and ready to go.”

They also had to be prepared to alter their care plans quickly.

“I might tell someone one day ‘this is the plan’ and then come in the next day to find the plan has changed,” Thieling says. “We are following different clinical algorithms to the point that we began assigning different colors for each algorithm to help keep everyone focused on the current protocols.”

“You have to do your best to communicate to your team and to build trusting relationships,” says Thieling.

Their team members had to plan and train even for preparing to see a COVID-19 patient due to the significant amount of time it takes to put on personal protective equipment.

“In our initial training on gearing up with all the proper PPE, it took 30-45 minutes to prep for a high-risk procedure per patient encounter,” Gilstrap says. “And when patients are critically ill, you may not have that much time to get dressed in PPE. It’s more teamwork than we have ever done.”

Both Thieling and Gilstrap, despite their focus on managing their departments and teams, are also providing direct patient care.

“I’m working night shifts, rounding, donning the PPE, seeing patients – actually living the plan we developed for patient care,” says Gilstrap. “Living the plan helps us understand how it is working and what improvements we can make.”

Both Thieling and Gilstrap credit much of their preparedness to take on the pandemic with the training they received as part of their medical education at the School of Medicine.

“I have always kept the opinion that the UofSC School of Medicine spends its clinical years, especially the third year, in providing meaningful clinical education for its students,” Thieling says. “By the time I graduated from the School of Medicine and started residency, I had already had opportunities to learn and perform many of the procedures I was doing in residency. You were expected to participate in a patient’s care on your first day of clinical care.”

Gilstrap appreciates the focus that the school places on why someone should become a doctor. “I became a doctor to take care of people – that’s the first thing I learned,” he says. “When I’m making a decision in terms of teaching, administration or patient care, I still value that my first role was to provide care for people. If you lean on that, you make better decisions.” 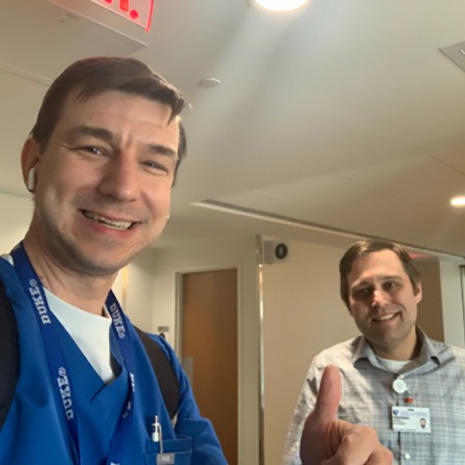 Alums helping lead the fight against COVID-19 at Duke Health

School of Medicine alums Jason Thieling, M.D., and Dan Gilstrap, M.D., are helping lead the fight against COVID-19 at Duke Health, where Theiling is medical director of emergency medicine and Gilstrap is medical director for the medical intensive care unit.