Chelsea Drennan a game changer on, off field

That’s how teammates describe Chelsea Drennan, a second-year professional student in the College of Pharmacy who holds the all-time assists record for the No. 3-ranked USC women’s soccer team.

Whether she’s scoring a game-winning overtime penalty kick to clinch victory for her team or calculating pediatric patient medication regimens on a clinical rotation, Drennan brings laser-like focus to whatever task is at hand.

She was the team’s unanimous choice to be captain and serves as a role model for student athletes, coach Shelley Smith said. “Chelsea has always displayed the commitment and dedication to be a successful student athlete,” Smith said. “She has earned the respect of her teammates and coaches with how she leads her own life every day, along with being a standout on the field with her skills and work ethic.

“She took on the role as a lone captain this year, was brave enough to put the team on her shoulders and has helped carry the program to the strongest season in history. I know she will continue with great success in her career and future beyond the playing field.”

Drennan, an Anderson native, came to Carolina interested in a healthcare career, but was unsure of which field to pursue. A friend enrolled in the pre-pharmacy program suggested she consider the profession, and former soccer standout Mollie Patton ’13 convinced her that she could handle the rigorous Pharm.D. curriculum while playing for the Gamecocks.

And once Drennan’s interest in pharmacy was sparked, she was hooked.

“I think the cool thing about pharmacy is there are so many career paths you can take — there’s retail or clinical, research or academia,” the Phi Delta Chi member said. “There’s so many opportunities.”

Juggling team and academic demands is not easy, but Drennan says years of playing competitive travel soccer honed her time management and study skills. Still, she said it’s challenging to carve out time to stay current on lectures and homework when the team is traveling.

Even when the team is at home, in a typical week, she’ll practice about 12 hours, 10 or so hours with the team and at least one hour on her own, in addition to the team’s matches. Her days begin at 7:30 a.m., and she usually doesn’t finish with practices, classes and labs until 5 p.m. when she shifts into homework mode.

Drennan approaches her studies with the same work ethic and self-discipline she applies to athletics.

“My mom would never settle for anything less than an A growing up,” she said. “She taught me to strive to be my best in everything, whether it’s on the field or off.”

Assistant Professor Christina Cox said Drennan is diligent with her coursework, sending midnight email reminders from the road about missing class and arranging follow-up meetings to ensure she understands the content. “She’s one of the top performers in class,” Cox said. “She asks good questions, and she’s always positive.”

Although being a student athlete in a demanding program can be tough, Drennan has embraced the experience.

“I think the best part for me has been the challenging side of it,” she said. “Studying pharmacy and playing a sport is difficult, but I’ve been fortunate to have great mentors. Mollie Patton is always there to keep me going. It’s hard, but eventually I’ll reap the benefits.”

This season has been a memorable one for the Gamecocks, who were undefeated in the regular season and enter the NCAA tournament as a number one seed. They will face off against Alabama State at 7 p.m. Friday at Stone Stadium.

Drennan said the team’s chemistry has been instrumental in their success. “We all play really well together,” she said. “We’re playing for each other. That’s probably the biggest thing that’s allowed us to be successful.”

While Drennan cherishes the game ball her teammates signed when she broke the team’s assists record, she is turning her attention to a bigger prize, confident the team will overcome its sole loss to Florida in the semi-finals of the SEC tournament.
“We know the ability this team has and that we can go really far, so we’re just looking forward now,” she said. “It’s a new season — it’s our third season. The only thing our focus is on now is Alabama State.” 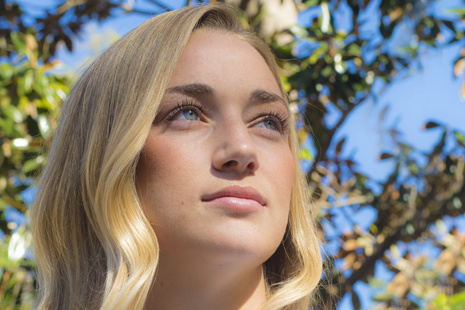