UofSC alumnus Ken Couch (1969 B.S. pharmacy) began his pharmacy career as a part-time drug clerk at just 15 years old. By the time he retired in 2016, he was at the helm of a company bringing in $2.4 billion a year delivering technology and services to pharmacies across the country. Ken is married to fellow pharmacist Susan Foster Couch (1976 B.S. pharmacy.)

Tell us about yourself:

My pharmacy career started in high school in 1962 when I got a part time evening and weekend job in a corner drug store. At the time, Craft’s Drug Stores was an “independent” chain of five or six stores. I went from UofSC straight to work at that company. I spent twenty years in total with Craft’s which had eighteen stores when it was sold.

My starting yearly salary as a pharmacist was $17,000. I had more money than I could spend. After the company was sold a second time in 1981, one of our customers, Jim Smith, Jr., offered me a job in a start-up venture named QS/1, a growing, high tech division of the J.M. Smith Corporation. ("QS" was for the Latin, quantum sufficient and the "/1" was for our first platform, the IBM Series/1.) I eventually was named director of National Marketing. That began a career love of marketing, advertising, and branding.

In 1991, Jim’s brother, H. D. Smith, moved me to Smith Drug Company as its president. I was there for 24 years and our SDC team was able to increase yearly revenues to $2.4 billion dollars, which is about $9 million in sales per working day. It’s even more than that today. I retired from “active” pharmacist duty in 2016.

How did you originally get interested in your field?

I loved playing football. But after being knocked out three time in practice my tenth-grade year, I decided that I was not going to take Sam Huff’s place on the now Washington “Football Team.” (Wearing ill-fitting helmets may be why I am like I am today.)

My dad found out that a local drug store would soon be in need of a part time Drug Clerk. So, at 15 I typed a resume. (I really would like to see what I put on that tiny piece of paper.) As I didn’t yet have a driver’s license, Mom drove me to the drug store and I walked in. I waited until all the customers were gone and walked up to the counter with my knees shaking and handed pharmacist Jim Snead, my pitiful resume. I told him that I wanted the job and waited. He looked at the resume and back at me and asked, “Are you 16 yet?” I paused and said “almost.” Jim said, “Well, it doesn’t matter. You are the first person to apply for a clerk’s job with a resume. You’ve got the job.”

For years I watched Jim and another Craft’s pharmacist, John Ford, work, help patients, run the pharmacy - and I fell in love with the profession. I dropped the thought of being a veterinarian because I noticed that not a single patient in the drug store bit the pharmacist.

Why did you choose the University of South Carolina?

Even though my dad had three degrees from Clemson, my mentor, Jim Snead (1956 B.S. pharmacy), convinced me to change from veterinary medicine to pharmacy and to go to UofSC.

What do you consider your greatest achievement?

My greatest personal achievement is my family. I am lucky to have married Susan Foster Couch. She is my best friend, a wife, a mother, and a colleague. I have three great children (two daughters and a son), who have given us five “perfect” grandchildren.

My greatest professional achievement is being named a Fellow of the American Pharmacist Association. I am honored to be one of just four or five APhA Fellowship recipients in the state.

What is the most important lesson life has taught you?

I hearken back to a quote from, of all people, Bob Marley: “The greatness of a man is not how much wealth he acquires, but in his integrity and his ability to affect those around him positively.”

What do you do to relax?

I sit in my man cave, crank my recliner back and watch Andy Griffith, Matlock, and the NCIS’s.

Who would you invite to your dream dinner party?

Thomas Jefferson, John F. Kennedy, and Jesus would be invited. I would love to sit back and hear Jefferson and Jesus debate religion, while Kennedy referees.

What would your superpower be?

The top of my bucket list would be to go the 150th British Open and St. Andrews next year. Susan and I plan to go.

Who would play you in the film of your life?

James Garner played a very believable pharmacist in one of his movies. 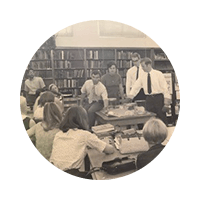 What is your favorite memory from pharmacy school at the University of South Carolina?

My favorite memories are going to high schools with Dr. Beamer to talk about pharmacy as a career and UofSC as the best choice - and also going to high schools to show the effects of dangerous drugs with lab white rats. These were refugees from the psychology department (they were really mean — I would have been too) and none died.

What is your advice for current students/future pharmacy professionals?