For Chancellor Nguyen, becoming a community pharmacist is a goal he has dreamed of for many years, and thanks to a $150,000 scholarship from the Jack Kent Cooke Foundation, he is able to relieve the burden of the cost of his graduate education as a first-generation college student.

Nguyen came to the University of South Carolina as a pre-pharmacy major. This is the second time he has been awarded a scholarship from the foundation. He initially received the Jack Kent Cooke College Scholarship; only those who received that award as an undergraduate are eligible to apply as a graduate student.

From the day he set foot on campus, Nguyen launched himself into focusing not only on his studies but also on being an involved student.

“Aside from the opportunity to build my network, I became involved in student life as a resident mentor, orientation leader, and extended mentor in Pillars for Carolina so that I would be able to help people– specifically freshman– transition to college and find love in the university experience and find their path like I did,” Nguyen says.

In addition to being a Jack Kent Cooke College Scholar as an undergraduate, Nguyen received multiple university awards including the University 101 Scholarship, the Outstanding Achievement and Student Triumph Award, and the Preston Residential College Spirit Award. During his first year as a pharmacy student, he received the Kappa Psi Scholastic Achievement Award and the James R. “Red” Smith University Housing Scholarship.

His parents’ endless love and support helped create his work ethic to succeed at the highest levels.

“My parents encouraged me growing up to always do the best that I can as a student and when helping others, and that helped turn me into a leader in school and out of school,” Nguyen adds.

My parents immigrated here from Vietnam and learned English as a second language. I saw how difficult it was for them at times ...

Nguyen is committed to becoming a community pharmacist and currently works as an intern with Kroger Pharmacy. He credits his family’s pharmacists with inspiring him.

“My parents immigrated here from Vietnam and learned English as a second language,” he recalls. “I saw how difficult it was for them at times to understand our regularly rushing doctors when receiving care and being prescribed medications. Despite that experience, our pharmacists always took time out of their busy schedule to make sure that my parents knew what our family was prescribed, how to take it, and what to expect.”

“Community pharmacists help patients beyond just dispensing medications. In a community pharmacy, I am given the opportunity to engage with patients, starting with a smile and then using my education to educate them on their prescriptions. I’ve already learned a lot in just one semester as an intern, and I look forward to everything else that the College of Pharmacy will teach me these next few years.” 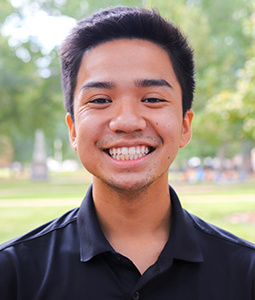