The University of South Carolina honored the memory Richard T. Greener, Carolina's first African-American professor on his 173rd birthday by unveiling a 2-foot model of a statue to commemorate the Reconstruction-era pioneer.

The memorial statue, which will stand 10 feet with its base, will be located outside the university’s Thomas Cooper Library and unveiled this fall. 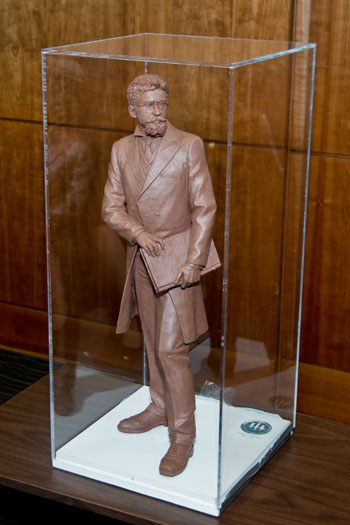 The university will erect a statue to honor its first African-American professor Richard T. Greener. The statue and base will stand nearly 10-feet and be a visible tribute to the Reconstruction era-pioneer.

"Several years ago, students in a class the College of Education, upon learning about Richard T. Greener, asked why they hadn’t heard of him and why there wasn’t something commemorating him on campus. Greener was such an important figure during his tenure here and this statue will help our community not just recognize him, but learn more about him and the Reconstruction era,” said Christian Anderson, an education professor who, along with associate art history professor Lydia Brandt and professor emerita Katherine Chaddock, has led efforts to recognize Greener for his contributions.

Greener was a pioneer. The first African-American to graduate from Harvard University, he was as prominent a national figure as Booker T. Washington, Frederick Douglass or W.E.B. Du Bois in his time. He immersed himself at Carolina during the era of Reconstruction. In addition to teaching classics, mathematics and constitutional history as the university’s first African-American professor from 1873 to 1877, he served as the first librarian to implement a modern catalog system for the university’s then-27,000 volumes, which were in disarray after the Civil War.

His commitment to equal rights and social justice was further fueled by his earning of a law degree from the university’s School of Law and admittance to the South Carolina Bar in 1876. When the university was closed by South Carolina’s government in 1877, Greener took a job as a clerk in the Treasury Department in Washington, D.C., and went on to serve as a professor and dean of the Howard University Law School.

The statue is a visible tribute to Greener and part of a larger fundraising effort that will support the statue and its installation and an endowment. The endowment will fund future public lectures and programs that reflect Greener’s pioneering spirit and contributions, which spanned an array of disciplines. It builds upon the efforts of the My Carolina Black Alumni Council, which in 1983 established a Greener Scholarship that is awarded to an incoming student each year.