Inspired by her parents to pursue college, Patricia Wilson Witherspoon realized her dream of becoming a physician

Patricia Wilson Witherspoon and her siblings might never have made it to college had it not  been for their father’s resolve that his children would get a better education than he did, no matter what . 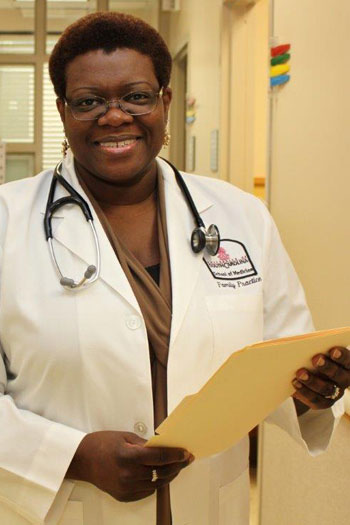 After being discouraged from becoming a physician herself, Dr. Patricia Wilson Witherspoon makes a point of using encouraging words when she talks to learners of all ages, from high school to junior colleagues.

“Education was very important to both my parents, but really critical to my father,” says Witherspoon, a clinical associate professor of family and preventive medicine in the university’s School of Medicine Columbia. “He's the only one in his family who didn't complete high school because as the eldest, he had to be on the farm — he was the one who made the sacrifice. So he was a major force encouraging us to pursue higher education and to go as far as we could.”

When farming didn’t work out, Witherspoon’s parents became part of the Great Migration that saw millions of African Americans leave the South in the 20th century to pursue better economic opportunities elsewhere in the U.S. Her father’s construction jobs in Connecticut provided well for their family, and Witherspoon was able to focus on her studies.

“We just never wanted for anything. My parents had a very strong religious base, and they both worked incredibly hard,” Witherspoon says. “They were very good stewards of the money that they had."

She earned a bachelor’s degree from Lincoln University in Pennsylvania and, because of her good grades there, earned a scholarship for a master’s in histology at Pennsylvania State University.

“I went to college believing in my heart I was going to be a physician, but, you know, things happen and people would say things that weren't so encouraging, like, ‘You can't do that,’ and so you kind of buy into it,” she says. “They are educators and it’s their job to know these things.’ ”

With her master’s from Penn State, Witherspoon and her husband moved to Baltimore where she worked in a lab at Johns Hopkins University. And that’s where her story takes a twist. She was asked to demonstrate a histological technique to medical students there and had a revelation.

“I was sitting there going, ‘Wait a minute, these kids don't have anything on me.’ I just did not feel that they were leaps and bounds more intelligent, and that's when I said, ‘I can do this,’ and I rekindled my desire to go to medical school,” she says. “After several conversations with my new life coach — my husband, who bore the load to support me emotionally and financially — I began the search for a medical school.”

I went to college believing in my heart I was going to be a physician, but, you know, things happen and people would say things that weren't so encouraging, like, ‘You can't do that,’ and so you kind of buy into it.

Witherspoon returned to Penn State where she earned an M.D. and completed a residency at what is now Prisma Health Richland. After working for the Richland Primary Care Healthcare Association for three years, she joined the faculty in the Department of Family and Preventive Medicine and never left.

In addition to providing patient care, Witherspoon has been involved in statewide diabetes initiatives, rural health research, the South Carolina Cardiovascular Task Force and as a volunteer physician at the Good Samaritan and Columbia Free Medical Clinic.

A 21-year career at the medical school has afforded her many opportunities, but mentoring is one responsibility she regards as paramount.

“I know firsthand the power of encouraging and discouraging words. I’ve made it my personal goal to reach out to learners, whether in high school or junior faculty members, to illustrate to them that dreams can come true.”

While her dream of becoming a doctor was realized, Witherspoon admits she never dreamed of living in the same state where her parents and grandparents grew up.

“When we were growing up, our parents would send us to our grandfather’s farm near Hemingway, S.C., to help out during the summers,” she says. “And year after year helping out with tobacco and picking beans and cucumbers, I swore I would never ever live in South Carolina. But as things turned out, I am certain South Carolina is the perfect place for me.”