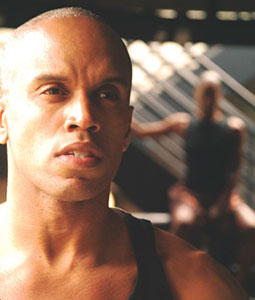 Thaddeus Davis is the Co-Director of Wideman Davis Dance and is on faculty as an Associate Professor at The University of South Carolina. He earned a Bachelor of Fine Arts from Butler University in 1993 and Master of Fine Arts from Hollins University/ADF in 2011. After an extensive performing career with leading professional companies, he continues to perform, research, choreograph, collaborate, and teach.

His current research explores the intersections of gender, class, race, and technology through an African American lens. His research is reflected in his choreography, writings, films, lectures, and panel presentations including: Migratuse Ataraxia (2021-2016), Choreographers in the Commons Sipping Coffee (2019), Female Relationships: The Gender Gap in Dance (2012), A Dissembled Life (2011), Dance Theatre of Harlem: Modernism, History, Culture (2011), and Balance (2009).

In addition to collaborative awards with Tanya Wideman-Davis, Thaddeus has received multiple honors and grants for his work including: Cultural Envoy to Portugal, U.S. State Department (2007), Highlight of the Arts Season, Commercial Appeal, Memphis (2006), Winner of The New American Talent Choreographers Competition, Ballet Austin (2005), Choo San Goh Award for Choreography (2004), Dance Magazine’s “25 to Watch” (2002), Best Premiere of the Season, Dance Europe, Once Before, Twice After (2002-03), New York Times Top Ten Dance Highlights of the season, Once Before, Twice After (2002), and Butler University’s “50 Under 50” (2004).

Thaddeus has taught as a visiting professor or guest artist for scores of colleges and professional dance programs. He has worked at University of Southern Mississippi (2020-21), Loyola Marymount University (2018), Connecticut College (2019), University of the Arts, School of Dance (2017) University of Iowa (2008) and for the following professional dance companies and programs: Alley II (2012), Boston Ballet (2011), Dance Theater of Harlem (2011), Ballet Quorum, Portugal (2007), Northwest Professional Dance Project (2005-2007), Center of Contemporary Art (2005-2007), Ballet Austin (2004-2006), Ballet Classical Dominican, Dominican Republic (2004-2006), Spectrum Dance Theater (2005), and Steps on Broadway (2003-2004). Thaddeus has taught as a Guest Artist at the following universities and dance centers: North Carolina School of the Arts (2012), Florida State University (2012), Webster University (2011), Long Island University (2011), Marymount Manhattan (2011), University of Missouri–Kansas City (2011), Goucher College (2007), Auburn University (2006), Alvin Ailey/Fordham University (2005), Butler University (2005), Arizona State University (2004), and The Julliard School (2003). In addition, Thaddeus serves as a member of Dance/USA’s Board of Trustees and Kid’s Dance Outreach. In recent years, our focus shifted from performances on the proscenium stage to environmentally immersive productions. A constant area of inquiry, over years, has been how audiences access our work. Exploring architectural and communal spaces increase audiences’ access and connects us with those who are witnessing our productions. When audience members are allowed to immerse themselves in a performative event, stronger and more meaningful connections are made. The politics of activating a public space becomes a shared, communal event, which stands in contrast to a private performance in a closed-off black box or proscenium. In our country, theatre spaces that are historically white—in their locations, programming, and culture, and with reputations that can be class-based—have not been welcoming to Black audiences. Our engagements with historically white spaces require their staff to do a different kind of work to build relationships with Black audiences, who will come to see our performances.