The University of SC Dept. of Theatre and Dance
presents

*There is no Sunday matinee performance for this production.

Sir Peter Hall's much-acclaimed stage adaptation, featuring songs by composer Richard Peaslee and lyricist Adrian Mitchell, brilliantly brings Orwell’s dystopian allegory about a political uprising that leads to totalitarian oppression to the stage.  As in the classic novel, the animals of Manor Farm band together to overthrow their two-legged masters, and create a world where “all animals are equal.”  Their utopia is short-lived, however, as a group of pigs conspire to prove that “some are more equal than others.”   “[The play] is filled with insights that remain sadly current… A tribute to the enduring power of a noble work.”  - The New York Times

Professor Stan Brown is directing the production, which he says is ultimately an argument for the power of personal choice.

“Because the allegory is specifically about the Russian revolution, moving from Czarist Russia into Communism, the lower class animals are forced to give up their individuality and confirm to collectivism. Ultimately those who do try to hold onto their individuality are punished,” says Brown.  “People making personal choices, driven by their personal preferences, regardless of what the government does or how the government looks, that’s incredibly important to this play.”

He adds, “One of my mentors told me that every war that’s ever been fought has been about trying to exert sameness.  There’s never been a war fought promoting diversity.”

A cast of graduate and undergraduate actors will embody Manor Farm’s mostly non-human residents, who Brown says will be portrayed in a way that suggests “the human animal.”

“There are some productions of Animal Farm in which actors are both costumed and attempt to imitate animals.  In others, actors remain human in their behavior and wear street clothes,” says Brown.  “I’m not interested in creating a literal animal.  What I’ve told the actors is to do animal studies as if they are playing human characters whose behavior is based on the animal they’re portraying.”

Valerie Pruett, a costume design instructor in the theatre program, is designing the animal costumes, which range from the plain, drab looks of the animal “proletariat” to more decorated and debauched styles for the beasts of the ruling class.

Scenic design for the production, created by design professor Nic Ularu, is described by Brown as “a mixture of farm meets concentration camp.”  In addition to physical structures, the show’s locations will be built with animated projections, created alongside Ularu by students Noah Valentim and Chandler Kellogg.

Two special guests artists are part of the production’s creative team.  Steven Gross, a conductor and pianist who has worked on Broadway for such shows as Phantom of the Opera, Dreamgirls and Chicago, is musical director for the production.  Genesis Garza, a professional lighting designer and assistant professor at North Greenville University, is creating the light design for the show.

“The timing of this production is totally accidental,” says Brown, referencing how Orwell’s classic tale may be relevant in today’s tense political climate.  He adds, however, that he’s “not going to betray the theatrical process just to preach.  Everyone should be able to make their own conclusions about where we are now.”

For more information about Animal Farm or the theatre program at the University of South Carolina, contact Kevin Bush by phone at 803.777.9353 or via email at bushk@mailbox.sc.edu. 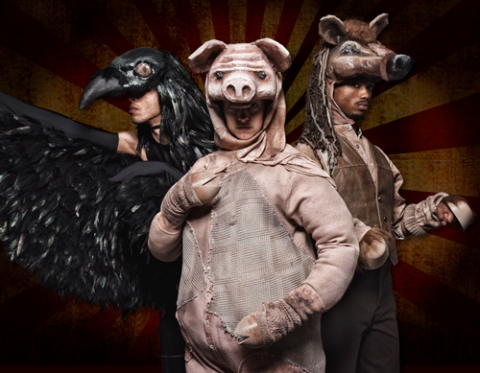 From left, Corey Robinson as Moses, Libby Hawkins as Napoleon, and Nicolas Stewart as Boxer