BALANCE at the Center for Performance Experiment

An original play written by Professors Steven Pearson and Robyn Hunt, BALANCE is the third in a trilogy of "riffs" on the works of Chekhov.

Conceived and directed by Steven Pearson
Written by Robyn Hunt

With characters and excerpts from "Three Sisters" by
Anton Chekhov

Center for Performance Experiment
718 Devine St.
(between Huger and Gadsden Streets, near the Colonial Life Arena)

Seating is on a first-come, first-served basis.  Arrive early, as seating is limited.

Conceived and directed by Steven Pearson, and written by Robyn Hunt, Balance is the third in a trilogy of works that Pearson calls “riffs” on the works of playwright Anton Chekhov.  Utilizing innovative physical movement and scenic design, Balance takes a lighthearted and whimsical look at the fates of Chekhov’s beloved characters Olga, Masha, and Irina in the years following their appearance in the play Three Sisters.  Excerpts from Three Sisters appear in the production in the form of flashbacks to the characters’ origins.

“We’ve set the action in Paris in 1919,” says Pearson.  “And what’s happening then is that everything is upended.  The Russian Revolution has happened, World War I is over, and there are already the seeds for the rise of Nazi Germany.  In this time of a sort of calm before the storm, but also real upheaval, how is it that people actually figure out how to live?”

This is the first full production of the work, which Pearson and Hunt first workshopped over a decade ago.  The other two plays in the trilogy are Gravity, which uses The Cherry Orchard as its jumping-off point, and Flight, which references characters and themes from The Seagull.  Both plays were performed at the University of SC, and went on to be performed at several venues around the country.

In addition to the Chekhov connection, the trilogy of plays is linked by Pearson and Hunt’s interest in “physical theatre,” a style that emphasizes physical movement as a means of expression.  In each, the show’s physical action reflects the title, with aerial choreography in Gravity and the actual construction of a 3/4-scale monoplane during Flight.

“If they [the cast of Flight] don’t put the bolts of the plane together, it doesn’t go, and there’s nothing fictional about that.  The same goes for Balance.  In this, we’re balancing things, balancing on things, trying to get into balance, so the physical act of balance is something that is extremely authentic.”

It creates for the audience a heightened sense of connection to the story, he adds.  “There is authenticity in actually doing something that the audience recognizes in the moment, and everybody has a kind of empathy for what they’re seeing.  We start to breathe together.”

For more information about Balance or the theatre program at the University of SC, contact Kevin Bush by phone at 803-777-9353 or via email at bushk@mailbox.sc.edu. 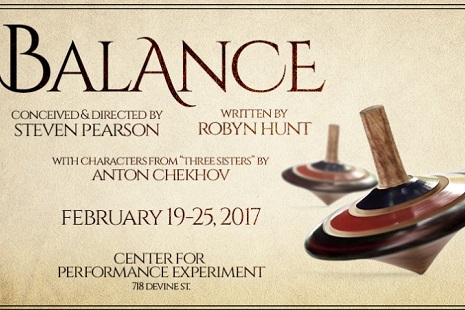