The University of SC Dept. of Theatre and Dance
presents

Anne Washburn’s critically acclaimed dark comedy, with a musical score by Michael Friedman, imagines how modern society rebuilds after enduring a major global cataclysm.  Starting in the present day, we’re introduced to a small band of survivors gathered around a campfire, trying to piece together an episode of the television show The Simpsons from memory.  Seven years later, those same survivors are staging traveling, theatrical versions of Simpsons episodes (including commercials) as part of a new, tribal economy.  Flash forward seventy-five more years, and we see that these recollections have progressed into the grand storytelling tradition of a new civilization.  A paean to live theater, and the resilience of Bart Simpson through the ages, Mr. Burns is an animated exploration of how the pop culture of one era might evolve into the mythology of another.

“Downright brilliant…makes a case for theatre as the
most glorious and durable storyteller of all.”
— The New York Times

“…makes the end of civilization look like the perfect time
to create glowing objects of wonder and beauty.”
— Time Out New York

Guest artist Jeremy Skidmore, who is directing the production, says that Washburn’s story is like watching three plays in one.  “The first act is actor-driven, and it’s funny and simple — a group of friends drinking beer around a fire, telling good stories,” says Skidmore.  “Then, the second act is more evocative of being on a movie set, watching them rehearse their repertoire.  It’s more farcical.  And, with the third act, suddenly you’re watching a heavily Gilbert and Sullivan-inspired musical of a particular Simpsons episode that parodies the movie Cape Fear.”

Tying all of this together, the director explains, is a “tipping of the hat” by the playwright to the way civilizations evolved as a direct result of humanity’s need to tell stories.  “From cavemen telling tales around a fire, to traveling bands of storytellers going from town to town, and ultimately leading to societies establishing permanent structures for storytelling, like the first Greek amphitheaters, it all starts with our stories.”

“There was a quote from someone that said, ‘If you have a strong understanding of Greek mythology, of Shakespeare, and of the Bible, then you will understand all allusions made in Western literature,’” says Skidmore.  “The Simpsons is just another encapsulation of that, because it’s almost one-hundred-percent comprised of allusions to pop culture events that are happening now.  If you extrapolate that eighty or a hundred years from now, it becomes mythology.”

Skidmore, a professional director with extensive, award-winning credits in Washington DC, is one of several professional guest artists at the helm of Mr. Burns’ creative direction.  Award-winning scenic designer Tony Cisek, a frequent collaborator of Skidmore’s, has designed the set for the production.  Matthew Marsh, an NYC-based composer and musician, is serving as the production’s musical director.  Freelance lighting designer Marc Hurst, a 2012 graduate of the UofSC MFA in Lighting Design track, is creating the lighting design for the show.  Costume design is by UofSC costume instructor (and alumna) April Traquina.  Frequent guest artist Danielle Wilson, another graduate from the theatre program, is handling sound design.  Undergraduate Finance major joHanna Pastorkovich is choreographing the production.

“I think what [the play] is getting at is that we as a culture get to decide what to keep,” he adds.  “We decide what’s important and what’s holy.  For instance, we still do Shakespeare today because we choose to.  And, in the world of this play, The Simpsons becomes one of those things.”

For more information on Mr. Burns, a post-electric play or the theatre program at the University of South Carolina, contact Kevin Bush by phone at 803-777-9353 or via email at bushk@mailbox.sc.edu. 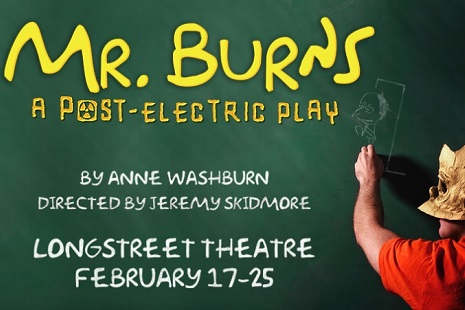