OUTLAW SONG at the Lab Theatre

Tickets:
$5, available only at the door

“The first half is primarily about the cat-and-mouse game between Billie and Roberta,” Stevens says. “As they get closer and as we as an audience learn more about them, we see that the roles of hero-cop and outlaw-criminal are a lot to live with. We see the cost of trying to make yourself into something larger than life.”

The production is underscored by another unexpected element: Mexican wrestling. Wrestler “El Soso” adds yet another layer to the chaos inflicted on the Old Western town. Stevens says he was inspired by the artistry of the profession.

“The professional wrestling in Mexico, Lucha Libre, is a very revered and respected discipline. Marrying yourself to a pursuit like that, especially to a pursuit that is on your body and is very physically demanding, was really fascinating,” he says.

In addition to the antics of the outlaws and theatrical wrestling matches, the play features live music, building from a single musician to a small band led by musical director Lochlan Angle.

While this is the play’s first full staging, Stevens organized a reading of the script last year at the University. Stevens, a BA graduate of the English program, is currently pursuing his Master of Arts in Theatre.  In 2015, another of his original plays, Player King, was picked up for publication by the British publisher Stagescripts, Ltd.  Player King was first staged at the Lab Theatre in April of that same year.

According to Stevens, directing a piece he also wrote is not without its challenges. However, he views the play as a “collaborative piece” between himself, the cast and the crew.

“We’re looking at the wild, Wild West, these American folk tales, a type of expression where it’s really about the size of the personality,” Stevens says. “It’s a piece about knowing your enemy, about appreciating people you disagree with and understanding their ideology even when you still don’t agree with it. It’s about trying to fight for legends.”

For more information on Outlaw Song or the theatre program at the University of South Carolina, contact Kevin Bush by phone at 803.777.9353 or via email at bushk@mailbox.sc.edu. 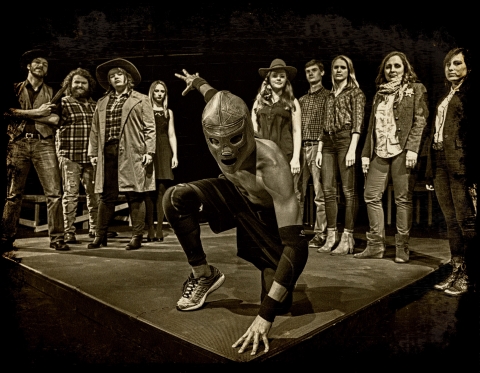