A production of "Grounded," which premiered at UofSC in October, performs at Trustus Theatre in Columbia, plus other national destinations.

Full Circle Productions, in partnership with the University of SC Department of Theatre and Dance, will present Grounded by George Brant,  at Trustus Theatre’s Cohn Side Door Theatre.

Show time is 8pm.  Regular admission is $25, with student tickets available for $15.  Tickets are available only at the door.  Trustus Theatre is located at 520 Lady St.  Grounded contains intense adult themes and strong language, and is not suitable for children.

Winner of a 2016 Lucille Lortel Award and the 2012 Smith Prize for Political Theatre, Brant’s one-woman play tells the story of an ace fighter pilot whose sky-high career is ended early due to an unexpected pregnancy.  She finds herself reassigned to a team of drone pilots, hunting overseas terrorists by day from a drab Las Vegas bunker and returning to her new family each night.  This new reality begins to take a heavy psychological toll as she struggles to reconcile motherhood with the pressures of waging a war half a world away.  "A searing piece of writing...gripping...a must-see" - The Guardian.  “Thought provoking, thoroughly engrossing…pulses with the rhythms of an epic war poem” - TheatreMania.

“It’s a multi-faceted story,” says director Robert Richmond, “that deals with how our warrior class are having to adapt to a style of warfare that is rapidly changing.  We meet a very confident, driven woman who, through the course of an hour-and-ten-minutes becomes completely disillusioned, and utterly at a loss to know what her life, or our life, is really about.”

The Trustus production is the first in a series of performances scheduled at locations outside of USC-Columbia, including dates at Oklahoma City University (February 17-18) and UofSC-Salkehatchie (March 16).  Full Circle has also applied to tour the show at arts festivals internationally.

Richmond, who heads the UofSC Department of Theatre and Dance, says that transforming a UofSC-developed work into a production that can be toured is something he hopes will happen more often, possibly even turning into a professional company in residence at the university.  All of the artists involved in Full Circle Productions have current or past ties to either Columbia or the UofSC Theatre Program.

For more information on Grounded, contact Robert Richmond at richmond.robert@gmail.com.

About Full Circle Productions
Full Circle is a company of professional artists who are dedicated to stories that deal with social justice and support diversity in all its forms.  Full Circle is committed to interdisciplinary collaboration, and is dedicated to making live performance that is accessible to the entire community by providing multiple points of entry to the experience.  In the pursuit of professional excellence, the company aims to make art that is graphic and eloquent, visceral and articulate, provocative and celebratory. 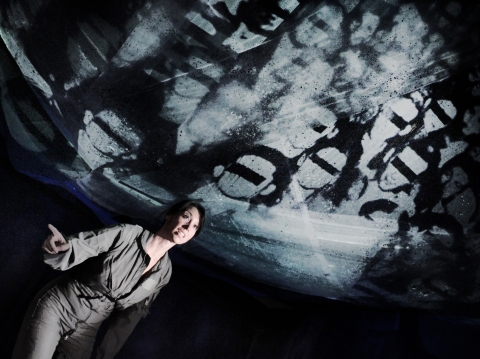