Students in Associate Professor Erica Tobolski’s THEA 440 Voice Acting class found themselves part of a cutting edge collaboration in the Spring 2016 semester.  Thanks to partnerships Tobolski fostered with faculty in the School of Visual Art and Design and the School of Music, the students’ performing skills brought life to original comics created by university Media Arts students.

Tobolski explains that the seeds of the collaboration happened several years ago when she met Associate Professor Northrop Davis from the School of Visual Art and Design.  “I asked him if he did animation because I’ve always wanted my voice students to have the chance to do voices for animated films,” she says.  While he wasn’t involved in animation, he did tell her about his specialization in manga, a japanese comic form which Davis, a screenwriter, utilizes to teach students skills in storytelling and storyboarding.  Tobolski’s wheels started turning, as she wondered if there still might be a way to add voices to the students’ inanimate creations.

The collaboration picked up steam in the Fall of 2015, as the two realized that it might be possible to link digital sound files to mangas which were showcased on wemakemanga.com, the online home of We Make Manga, a student group founded and mentored by Davis.  Tobolski and interested theatre students met several times with Davis’ team, and with the addition of School of Music Audio Engineering instructor Jeff Francis, formal plans were set.

Over the Spring 2016 semester, Tobolski’s students voiced five manga projects — four student creations and a portion of a manga work spearheaded by Davis — all with a wide variety of characters and genres.  “One was a fantasy story about a woman and her polar bear companion,” Tobolski says.  “Another was a comic piece featuring three bumbling guys on a secret mission.  They were all just very different.”  Tobolski says the works ranged in length from one-and-a-half to fourteen minutes.

After a few days of working with the manga creators to cast the parts, recording sessions were set up with Francis and his student audio engineers.  Then, with her students scheduled in the recording studio, Tobolski saw another opportunity.

“I also teach commercial voice-over in the class, and I asked Jeff if he would be interested in working with me on those projects.  So, really it was a two-fold collaboration,” Tobolski says. In addition to doing character work for the manga projects, the THEA 440 class worked with Francis’ audio engineering students to create solo and duo voiceover spots.

Tobolski says spending so much time in the studio brought a new level of real-world experience to the class.  “The students got to have the experience where somebody is adjusting the microphone for you, then giving you your cues, and you have to deliver,” she says.  “And that’s the key thing.  Other people are relying on you to do your job well.  If you’re recording on your own, you can do as many takes as you want.  In a professional studio environment, you might get a chance to do several takes, but you really do have to deliver.  That’s what was unique with this class.”

Even after the spring semester, work on the recorded manga projects is on-going, as second-year graduate theatre design student Baxter Engle has been tasked with creating sound effect beds for the recordings.  The fully-produced spots will be uploaded to the wemakemanga.com website once final production is completed.

Tobolski says she plans on collaborating further with both Davis and Francis, for the practical benefit of all of their students.

“In terms of the THEA 440 class,” she says, “it’s all about learning how to put your acting skills to use on many different kinds of voiceover work, whether commercials or narration or character-driven projects like animation.  To be a good voiceover artist, you not only have to have to know how to use your voice, you have to bring in all of your acting skills to be successful.” 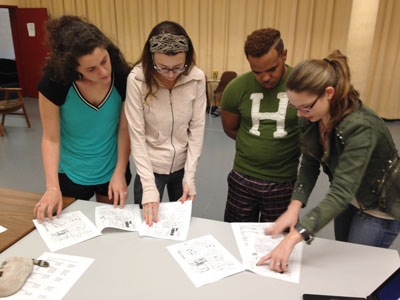