Dance Program Founder Looks Back on 45 Years of Dance Excellence

Professional ballet dancer Susan Earle came to South Carolina from California in 1975, newly married and having just earned her M.F.A. in Dance from UC-Irvine.  With waist-length hair, a freewheeling style and a fiercely determined attitude, she was an immediate standout when she applied that year to bring her expertise to students at the University of South Carolina.  And, while the marriage unfortunately didn’t last*, in the years since her career at UofSC has made a multi-decade impact.

That legacy will be celebrated May 8 at 6:30pm as the UofSC Dance Program and Board of Dance presents a Virtual Dance Gala commemorating the 45th anniversary of the UofSC Dance Company.  Featuring vintage performances from the dance program’s history, as well as commentary from university leaders and accomplished alumni, the online streaming event also serves as a fundraising effort supporting scholarships for dance majors.

“I knew my life would perish without dance in it, and there was really very little dance at the university, so I put in my application,” remembers Susan Anderson (née Earle), now a Distinguished Professor Emeritus from the university.  Accepted part-time, it was an inauspicious beginning that found her initially teaching a single modern dance class exclusively for Physical Education majors.  The years immediately following, however, saw dance at the university begin to flourish.

“The person that was most effective in helping me start the dance program was Dr. Patti Gillespie, who was the new chair of what was then the Department of Theatre and Speech. She loved ballet and loved dance and felt the students really needed it.  It was such a natural combination.”  With Gillespie’s help, new classes including ballet and jazz were added and dance became a required component of the theatre program’s curriculum.  With additional technical assistance from the department to mount dance productions, plus financial support from Student Government, the USC Dance Company was born.

“That first year, I did a ballet called Pleasures of Paris, created from scratch.  Then the artist Blue Sky found me and we did a ballet together called Planet Dance.  We started doing big musicals also, like Oklahama! and Carousel, and I was choreographing all of those and training dancers at the same time.  I was teaching sometimes three or four classes a day and rehearsing at night.”

“Many students came to the university because of the USC Dance Company,” says Anderson.  “They had heard of our reputation, that we were doing full-length ballets and going off to the American College Dance Festival and winning.  They could major in something else and dance as part of their activities.”

Within a few years, additional faculty came aboard to help with the expanding class load, and by the early 1990s, a dance minor had been established.  But, even before degree tracks emerged, the reputation of dance at the university made it a sought-after course of study.

“Many students came to the university because of the USC Dance Company,” says Anderson.  “They had heard of our reputation, that we were doing full-length ballets and going off to the American College Dance Festival and winning.  They could major in something else and dance as part of their activities.”

Anderson says it took three attempts to start the B.A. in Dance degree track, which launched officially in 2006.  From that point on, the program and its performance company made meteoric jumps, bringing on faculty with ties to major dance companies like the NYC Ballet, Martha Graham Dance Company and Joffrey Ballet, and earning the rights to do works by legendary choreographers such as George Balanchine, Twyla Tharp and Jerome Robbins.  In 2009, the program moved from the Blatt P.E. facility, where it had started all those years earlier, into a new, state-of-the-art dance facility.

“People were clamoring from all over the country to get into this program because it was unique,” Anderson says.  “I sort of modeled it after UC-Irvine’s program where you had to take daily ballet classes.  You could take modern, you could take jazz, but ballet was the basis – just like how a classical pianist has to learn to play all the notes properly.  We were unique among other universities in that sense.”

A key component of the program’s success, Anderson is quick to acknowledge, was the creation of the UofSC Board of Dance, a donor group dedicated to raising funds for scholarships to attract and assist dancers of the highest caliber.  Since its inception, the board has generated critical funding for the dance program, chiefly through fundraising galas held every spring. And, this year, Anderson and the board weren’t about to let a pandemic get in the way of that support.

"People were clamoring from all over the country to get into this program because it was unique,” Anderson says.  “You could take modern, you could take jazz, but ballet was the basis – just like how a classical pianist has to learn to play all the notes properly.

The Virtual Gala will raise those funds in a variety of ways, from ticket sales to sponsorships and even an online silent auction.  To-go dinners are also being made available for an additional donation.  Individual tickets to view the streaming event are $50.  Sponsorships, which offer additional tickets, a gourmet gift bag, and advertising opportunities, are available in levels from $150 to $5000.  The gala’s Principal Sponsor is Nephron Pharmaceuticals.

To purchase a ticket or become an event sponsor, visit bit.ly/uofscdancegala.

For Anderson, looking back at 45 years of history has uncovered glowing accomplishments and made her more determined to create an even brighter future for the dance program.  Events like this year’s gala are a crucial part of making that future a reality.

“Every year has been a turning point,” she says.  “But, it takes a team to make it happen and you have keep striving to take the program to the next level.  If you think, ‘I only have this much money and I can only do this kind of work, you will only have that kind of work.’”

For more information on the Virtual Dance Gala contact Heather Ross-Boyd in the UofSC Dance Program main office by phone at 803-777-5636 or via email at dance@sc.edu.

*Susan later married Dr. Einar Anderson, a fellow artist who she says understood the phrase, “I can’t! I have rehearsal!”  They have been married for 36 years. 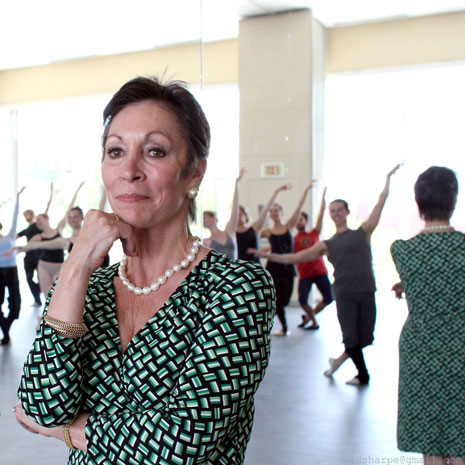