Hailed by The New York Times as one of the best plays of the last 25 years, Eurydice is Sarah Ruhl’s inventive reimagining of a tragic Greek myth from its heroine’s perspective. On the day of her wedding to the musical prodigy Orpheus, Eurydice unexpectedly falls to her death and descends into the underworld, where she reunites with her departed father and sets off on a journey to remember — and reclaim — the life and love she lost.

“A luminous retelling of the Orpheus myth…where both author and audience swim in the magical, sometimes menacing, and always thrilling flow of the unconscious."

“It’s based on the classic myth, but Sarah Ruhl’s version is far from its origins,” says director Lindsay Rae Taylor.  “It’s not what you expect it to be.”

In traditional lore, the action of the story is focused almost exclusively on the heroic efforts Orpheus takes to save his beloved.  Ruhl’s version, however, centers the story on Eurydice’s underworld journey, adding the poignant twist of reuniting her with her deceased father.

“Sarah Ruhl has said that the play is ‘transparently personal,’” says Taylor, “and was written as a way to navigate her own experience with losing her father at a young age.  In this version of the story, the central relationship is really between parent and child, and Eurydice finds herself having to choose between returning to her husband on Earth or staying in the underworld with her father.”

The underworld in Ruhl’s version, Taylor says, is far from the dark and scary place we normally imagine.   She describes it instead as more of a “macabre circus,” with quirky, fantastical elements that make it more Alice in Wonderland than land of the dead.

“It’s the opposite of hell,” she explains.  “The space that’s created for Eurydice is playful, very safe and inviting, and a place of learning and discovery.   It’s a place you don’t want to leave.”

“To be able to work on show like this is a gift to an artist,” Taylor says.  “It has an openness to interpretation, and, even though it’s a story concerning death, it fills you with hope in every scene.”

“You hear the title and think it will be archaic, but actually it’s quick-moving and inviting – and unlike any play I’ve ever worked on.”

For more information on Eurydice or the theatre program at the University of South Carolina, contact Kevin Bush by phone at 803-777-9353 or via email at bushk@mailbox.sc.edu. 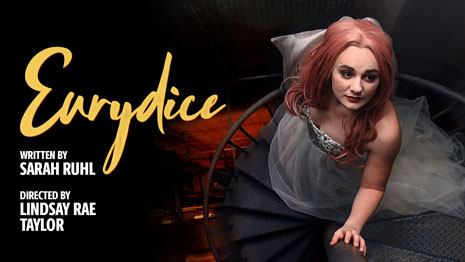