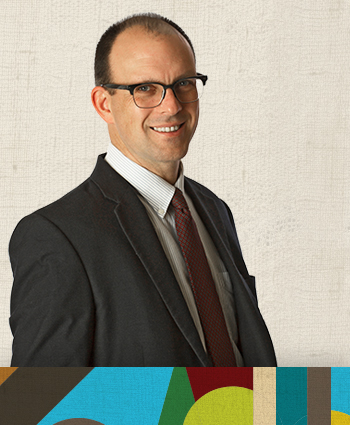 “Drama is doing. You can’t have a drama unless someone is doing something, and learning is the same way.” — Peter Duffy

As head of the University of South Carolina’s MAT program in theater, Peter Duffy spends a lot of time teaching graduate courses in theater education, supervising student teachers — and encouraging his students to ponder exactly these types of questions.

“Theater is a place where people can gather in real time to engage in these questions about what it means to be human,” says Duffy. “And that matters. Having an aesthetic experience with other people matters.”

But Duffy’s insights into the power and purpose of the theater aren’t reserved for graduate students planning to become drama teachers. A recipient of the 2017 Garnet Apple award from the Center for Teaching Excellence, Duffy has also developed a reputation for innovation in the undergraduate classroom — thanks in part to a large section course on theater appreciation.

Over a single semester, the 140 to 200 students in Duffy’s theater appreciation course research, write, produce and stage an original ethnodrama that ultimately serves as their final exam. Along the way, students also work on costumes, lighting, marketing—pretty much every aspect of the industry.

“I want students to understand all of the roles of the theater artist,” he says. “Almost every career you can think of can be involved in theater. I want them to understand that theater is more than just acting. That’s why we go through this crazy process.”

It’s not easy — “The first semester I had 200 students, and I thought, ‘OK, this is either going down hard and in flames, or its going to go OK,” he says — but Duffy reflects continuously. He also keeps student engagement front and center in his thinking.

“Honestly, I just kind of got tired of hearing myself talk so much, and I was trying to figure out how to get my students more involved,” he says. “Because really, if I believe in the things that I teach my graduate students in the theater education program, then I should be reflecting that in my own practice.”

It’s a question of practicing what he preaches, which means, among other things, making learning relevant to individual students’ lives.

“I’m not there to dump knowledge into my students’ heads. I care deeply that learning is personally relevant and that students are emotionally engaged,” says Duffy. “That’s crucial. There should be a sense of belonging in the classroom, on the intellectual level, because your background matters.”

Duffy’s own background includes 10 years as a high school teacher and a stint as education director of a theater company in North Carolina before he obtained his Ed.D. at Carolina.

“When I started to teach some drama in school — I started as a German and English teacher, the drama came later — I saw what an incredibly powerful tool it was,” he says. “I joke all the time that if kickball had the exact same impact on learning as theater does, I’d be a professor of kickball.”

On the one hand, Duffy is joking. On the other, he’s underscoring the value of embodied cognition, a pedagogical theory that links learning with the bodily senses.

“Drama is doing. You can’t have a drama unless someone is doing something, and learning is the same way,” he says. “All the information that gets to our brain comes through our senses. Theater activates student learning in ways that I’ve not seen otherwise.”