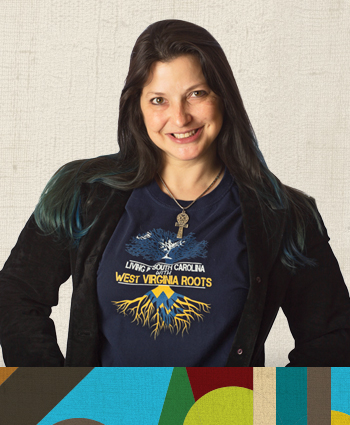 “I joke with my students that the reason why I always pay for their lunch when we celebrate graduation is because I am working to build a cadre of scholars who will help take care of me in my old age." — Mindi Spencer

In her nine years at the University of South Carolina, Mindi Spencer has focused on adapting her teaching to better serve students’ needs. During that time, Spencer says she has grown from an instructor into a teacher in the classroom, and from a teacher into a mentor outside the classroom walls.

“If we as teachers don't adapt to the changing needs of our students, we will find ourselves at the end of our evolutionary branch,” says Spencer, an associate professor in the department of health promotion, education and behavior and the Institute for Southern Studies. “The world has changed; Plato never had an iPad, and Aristotle never had to read Plato’s course announcements on Blackboard. Although the heart and soul of teaching remain the same, I believe in the need to adapt certain strategies to effectively educate the students of the millennial generation.”

Spencer, who was awarded the Michael J. Mungo Undergraduate Teaching Award, says when she arrived at Carolina in 2008, she didn’t fully appreciate the difference between teaching and instructing. A health disparities scholar, she was recruited to bring together scholarship between the Arnold School of Public Health and the Institute of Southern Studies, housed in the College of Arts and Sciences. The course she created, “Southern Discomfort – Public Health in the American South,” was based on the premise that effective education on regional health disparities requires that students relate the material to their own experiences in the American South.

“This course covers everything from the ‘diseases of laziness’ to the ethics of Tuskegee, from barbecue to sexual health. And that is when it happened. I had been an instructor before, but did not become a teacher until that semester,” she says. “Ever since then, my objective has been to push my courses to their pedagogical limits and bring as many students as I can along for the ride.”

As a teacher, she builds on the personal strengths of each student to get them excited about the course material. She asks students to describe how they learn best, explaining that her courses are “organic” — changing each semester based on the needs of the students, her strengths, the changing area of scholarship and current events.

She says it’s an “interesting time to be a teacher in higher education,” as education initiatives such as No Child Left Behind have produced “a generation of young adults who are bright and ambitious but terrified of ambiguity.

“They crave standardization, obsess on social comparison, and believe that the world is — or should be — presented to them in a multiple-choice format. There is a good reason why we find ourselves frustrated at times in higher education. Although it has been a learning process, I have found that the best solution is to take what I know of the millennial generation and do everything I can to challenge them. When they leave my class, I want them to know that they were active participants in their own learning and to feel confident that they ‘really got it’ – and not because I told them what ‘it’ was.”

The world has changed; Plato never had an iPad, and Aristotle never had to read Plato’s course announcements on Blackboard.

As a teacher, Spencer said she integrates contemporary and local issues as a way to help students learn and synthesize information. For example, in her “American South in the 20th Century” class, she asked students to reflect on the power of states' rights by exploring how the controversy surrounding the Defense of Marriage Act (DOMA) was similar to the Prohibition Movement of the 1920s. In her “Health Problems in a Changing Society” class, she taught the fundamentals of disease epidemiology and public health preparedness by having the students form small groups and design a plan for surviving the zombie apocalypse.

She also asks students in this class to take a current public health issue and create a policy brief that they then prepare for submission to a local, state, or national representative. Once the students choose an issue they are passionate about, their creativity and talent amazes her.

“These undergraduates are hungry for genuine self-confidence; much of what we teachers perceive to be indifference is only because the students are not convinced that they can (and should) make a unique contribution to society,” Spencer says. “I firmly believe that once they find their own voice in the classroom, they will be more willing to take that voice outside of the classroom and into their everyday lives.”

“I joke with my students that the reason why I always pay for their lunch when we celebrate graduation is because I am working to build a cadre of scholars who will help take care of me in my old age. But in all seriousness, it has been a privilege to watch my students — particularly undergraduates — transition to the next chapters in their lives," she says. "Since I came to USC, I’ve watched students present their work at local and national conferences, earn fellowships and scholarships, go to graduate/professional school, and travel the world teaching English as a second language. I am proud to have many of these students as my colleagues and share in their joys and sorrows as they move through adulthood. These diverse undergraduate and graduate scholars have left their handprints on my heart; I never expected that teaching would have such a lasting impact on my life outside of the classroom.”