Emma McBride, 19, first became interested in computer science when she coded robots for the Robotics Team at Dorchester High School. In addition, her father works in technology for a large financial institution, and she fondly recalls her fascination with the tools he brought home and the enjoyment she felt when she helped him take them apart, work on them, and put them back together. Between her father’s influence and her experience on the Robotics Team, she became committed to a career in information technology. She said her father encouraged her to pursue a degree in Computer Science at South Carolina so she could “build the tools, not just use them.” And that is exactly what she is doing.

As a sophomore, McBride is already making a name for herself in the cybersecurity profession. As vice-president of the Women in Computing club at USC, she recently attended the Grace Hopper Celebration of Women in Computing Conference in Orlando. She was able to network and hear presentations by representatives from well-known companies such as Boeing and Vanguard. She said the experience was fascinating and gave her the opportunity to “have small talk with recruiters and gain some hands-on experience in networking.” At the conference, she also interviewed with several companies about summer internship programs. She was accepted for a prestigious paid internship at Northrop Grumman, a multinational aerospace and defense technology company.

McBride said her experience working as a student employee in the Division of Information Technology’s (DoIT) Information Security Office helped her secure the internship. She described her work experience as “invaluable,” as it has given her hands-on experience investigating and responding to possible security incidents and the opportunity to learn and apply concepts. She said the work experience with DoIT taught her to use IT security language accurately and confidently, which was impressive to companies she interviewed with.

The internship with Northrop Grumman will allow her to work with a software engineer team for cyber security. Since Northrop Grumman partners closely with the U.S. government and the military, McBride will be required to acquire and maintain a national security clearance, a huge accomplishment for a minor. Robert Wilson, director of security operations and incident response at South Carolina, said, “security clearance will unlock huge opportunities for Emma in the future. Once you have a clearance, the amount you are paid increases, the opportunities open up, and it's rare to have one coming out of college - especially if you're not in the military." McBride said working with data from the Federal Government is an opportunity she has dreamed about. “I think exploit testing and being taught how to reverse engineer malware is one of the coolest things ever and I’d love to do that for the country as a whole one day,” she said.

McBride is thankful for the support she receives from the full-time employees she works with at DoIT. She said she receives constant coaching and support and knows if she makes an error, her supervisors will help her determine what went wrong, how to fix it, and how to make sure it does not happen again. “They are willing to give me experience and teach me, and that’s just great,” she said. She encourages students to pursue jobs at the university whenever possible, as she does not know if she would receive the same type of learning experience elsewhere. She also encourages fellow students to make sure they have a professional support system. She said her job at the DoIT has not only allowed her to learn from seasoned professionals, but from her fellow student workers as well. “I know that I am developing a solid support system now, and that’s priceless,” she said.

To find out more information about student employment within the DoIT, visit the Student Employment page. 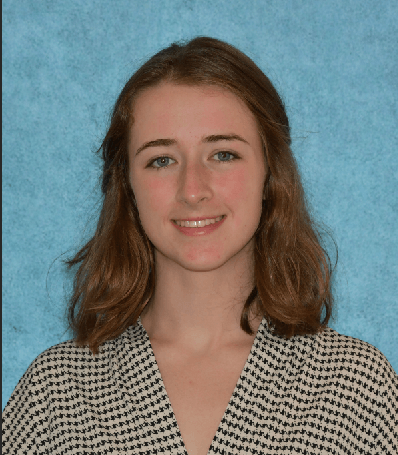 Sophomore Emma McBride says her experience working as a student employee in the Division of Information Technology’s  Information Security Office has opened many doors for her.