He possessed a discerning disciplined presence befitting a leader.

Lives depended on him. Lives were influenced by him.

Dr. Charles H. Witten shaped the future for all he encountered.

Witten began his career as a research chemist with the General Printing Ink Corporation in Rochester, New York, until America called him to fight in World War II. Since he had two degrees in chemistry, Witten was offered a direct commission as a U.S. Navy Ensign in March 1941. This enlistment would become a defining moment for the direction Witten would take for the next 22 years.

He rose swiftly through the ranks to executive officer of the USS Maurice J. Manuel and the USS Okanogan, and then to commanding officer of a succession of four combatant ships. These assignments were strategic in North Atlantic convoy duty, Solomon Island Campaign, Invasion of Tarawa, Attack on Marcus Island, Philippines campaign, and the Okinawa Campaign. Staff jobs that he held were as Planning Officer for several high-level commanders such as COMMANDER IN CHIEF ATLANTIC COMMAND, NATO SUPREME ALLIED COMMANDER ATLANTIC and NATO COMMANDER IN CHIEF EASTERN ATLANTIC AREA.

The Destroyer History Foundation asked Lt. (jg) (later Capt.) Chuck Witten, USN (Ret.) to share an excerpt from his then unpublished biography Sailor, Scholar, and Traveler: The Life of Charles H. Witten As He Remembers It. Witten chose to discuss his position as being a radar officer, navigator, and “C” division officer on board the destroyer USS La Vallette, DD 448, during Battle of Rennall Island.

La Vallette was a destroyer in Task Force 18, destroyers and jeep carriers that were escorting the heavy cruisers Louisville and Chicago to the Solomon Islands. On January 29-30, 1943, this convoy valiantly fought against 1600 enemy aerial torpedo bombers. During that intense two-day battle, La Vallette was struck by an enemy bomber torpedo before ditching into the sea. “The plane passed so close over our stack, almost hitting it, that I could actually see the pilot’s face. Then ‘bang,’ we were hit,” noted Witten. “I guess I was knocked to the deck, and this is probably when I suffered the broken neck, which showed up years after I retired.” Undaunted by the inconvenience of pain, Witten completed his mission in the Solomon Islands.

Witten embraced each challenge in his life - military, civilian or educational service – as he did that day. With leadership came responsibility – a responsibility to act, lead, protect and help others.

Serving the University of South Carolina

At age 44, Witten retired from active duty to become the Commanding Officer of USCs Naval ROTC and Professor of Naval Science. He was considered one of the Navy’s younger Captains.

Witten was also a graduate of the US Navy Line School, the US Naval War College and completed a National Defense Education Act Fellowship at Michigan State University. In 1962, he earned a M.Ed. from the University of South Carolina College of Education while serving as the Commanding Officer of the USC Naval ROTC.

In 1963, then USC President Tom Jones formed an Ad Hoc Committee on University Affairs to oversee what would be dubbed I-Day (integration day) and named the former Naval Officer the new Dean of Students, known today as Vice President of Student Affairs. Witten outlined the university’s expectations for integration and encouraged each student’s full cooperation. On September 11, 1963, Robert Anderson, Henrie Monteith, and James Solomon enrolled at USC–Columbia as the first African-American students.

Witten recalled a poignant moment, which he mentions in Reflecting Back, Looking Forward, when former USC President Tom Jones introduced him to the V.P. of the Ford Foundation by saying “I want you to meet my vice president in charge of all education outside the classroom.” Witten thought that was very significant since “the role of student affairs was to facilitate the education of students and provide for the education with such things that they didn’t get in the classroom.”

Witten intrinsically knew what needed to be done and then did it. During his twelve years as Dean of Students, Witten established many programs that are still in existence today at USC. Some of which are the Counseling Center, Office of Student Financial Aid, Office of Orientation, the Office of Career Advisement, International Student Affairs, Minority Student Affairs, Project Talent Search, Kampus Kiddie Kare, and the Office of Volunteer Services. He also established the first Upward Bound program at any state university in the Southeast and the first semiprofessional program to recruit resident advisors and hall directors for dormitories.

As a tribute to his vital role on campus, USC’s Garnet and Black staff dedicated the yearbook to Witten:

In deep appreciation for his outstanding service to Carolina, its administration and students, we proudly dedicate the 1966 Garnet and Black to

The following year, Witten was appointed Director of the Southeastern Region of the National Association for Foreign Student Affairs (NAFSA). Founded in 1948, NAFSA is the professional organization for those working with programs in international educational exchange. Witten’s USC office worked with approximately 140 foreign exchange students from 36 different countries.

On June 30, 1975, Witten resigned from his duties in the Student Affairs Office to teach full-time in the College of Education, where he had taught since 1962 as an associate professor. In 1977, he took a sabbatical to earn a Ph.D. in Education from the University of North Carolina.

When interviewed by Bill Grant of the Gamecock staff, Witten said “Although, in the sum total my years as a student affairs administrator have been very satisfying years, as I have seen progress and accomplishments, they have not been without their price in weariness and detraction from personal and family life.”

Of Witten’s departure, then V.P. of USC’s Operations Harold Brunton said “Dean Witten had a rough twelve years. When he first came to USC and took over student affairs, he was faced with integration. Then there was the wide change in regard to student ideas, and the riots of 1970. Dean Witten helped to change the resident life from ‘just a bed’ to the institution of many recreational facilities available to students living on campus.”

Witten was instrumental in starting USC’s College of Education master's and doctoral programs in the School Leadership and Higher Education Administration.

Witten also started the Higher Education Administration Ph.D. program, which prepares students for a variety of leadership positions in institutions and agencies. Graduates of the program serve as university administrators, school superintendents and principals, administrators in school districts and government agencies, college and university faculty, and other leadership roles.

In 1985, Witten held a Fulbright Award to study the culture of Pakistan and, with a group of educators, advised Pakistan's Minister of Education. In 1986,Witten retired from USC College of Education as Distinguished Professor Emeritus.

To inspire and encourage students to pursue leadership roles in higher education, Witten established the Charles H. and Margaret M. Witten Fellowship, awarded to doctoral student(s) who is enrolled in the HESA program and the  James B. Campbell-Charles H. Witten Fellowship, which honors honors two former Vice Presidents of Student Affairs at USC.

Give to or Apply for these fellowships.

The Museum of Education's Charles and Margaret Witten lecture brings to the campus distinguished academics from the fields of education and the humanities that invigorates the academic discussions of the faculty, staff, and students.

The College of Education remains eternally grateful for Dr. Witten’s influence and leadership. Each USC faculty, student, and staff member will cherish their personal memory of Dr. Witten and the interaction that they shared with this legendary man, hero and leader. Rest in peace Dr. Witten (November 18, 1918 - July 21, 2015). We are honored to have known you. 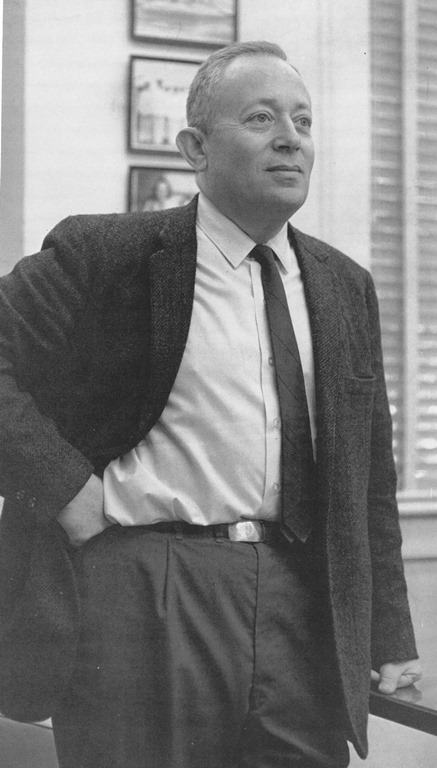 A true leader and visionary

“Dr. Charles Witten has been a wonderful colleague and friend to the College of Education for such a longtime. The legacy that he leaves behind is all of his colleagues, protégé’s and students who were lucky enough to have been taught and mentored by him.

The College of Education’s graduate programs in Student Personnel Administrator and Higher Education Administration continue to be strong and recognized thanks to his creativity and contribution.

We will miss his encouragement, wisdom, and creativity. When I think of Dr. Witten, I am reminded of an unknown quote – “You were given this life because you were strong enough to live it.”  - USC College of Education Dean Lemuel Watson

“It is always sad to learn about the passing of a previous professor in the Department Educational Leadership and Policy, and was the case with Dr. Charles Henry Witten who was a fulltime faculty member in the Department from 1975 until 1986 retiring as Distinguished Professor Emeritus.  While serving within the Department, Dr. Witten was instrumental in the development of PhD Program in Higher Education and the Master’s Program in Student Personnel.  Due to his insights both of these programs remain viable even today.  More specifically, his models for these programs have been adopted by several other institutions.  Indeed, the Department was/is extremely fortunate to have had a scholar with his visions among the faculty ranks. “

“Chuck Witten defined the word "leadership" in the College of Education.  And in that capacity he was particularly interested in integrating COE leadership with University leadership.  He saw the Higher Education and Student Affairs (HESA) Program as an essential route in that direction.  He crafted the HESA graduate program in a way that made it invaluable to the university and a model for other universities.  His abilities in integrating student learning with ongoing administration (through classroom and experiential learning) catapulted the Higher Education and Student Affairs Program at USC to placement among the top five such programs in the country.  At the same time, he took an avid personal interest in every student in the program.  He challenged them, pushed them, cheerleader for them, and applauded them.  Hundreds of university administrators throughout the country today continue to tell us that Chuck iOS the inspiration for their accomplishments.”

“Chuck Witten was a storyteller and with good reason: He had lots of stories to tell. The first time I met him was shortly after I came to USC in 2007. Dr. Michael Welsh took me to his home to meet him and we had a long, engaging conversation about the creation and history of the HESA program.  He was in his late 80's at the time, but could remember all kinds of names and details, especially of those whose dissertations he supervised.  Five years later, I did a "gallery talk" with Dr. Witten about the 1963 desegregation of USC. I stopped at the Witten's home after work and stayed for nearly five hours as he recounted stories from the early 1960s when he had been Dean of Students. He joked with me that I would need to keep him within our one-hour time limit for our presentation. [This may have been one of his last public talks.]”

“Charles Witten’s influence on the College of Education is quite substantial and will continue for years. The Department of Educational Leadership and Policies’ Witten Award has helped and encouraged many students who have become leaders in the field of higher education administration, and the Museum of Education’s Witten Lecture has brought leading scholars—Maxine Greene, Herbert Kliebard, Bill Ayers—to the College, invigorating the academic discussions of the faculty, staff, and students. From Witten’s generosity, the College’s intellectual climate has been greatly enhanced.”