Hannah Martin always knew that she would write a novel for her senior thesis, even before she knew what that novel would be about.

"Patrick Rothfuss, who's a great fantasy writer, not a great person. But he once said, ‘I'm like a shark. If a shark stops swimming, it dies. If I stop writing, I die.’ And that's very much the same thing for me," Martin said.

The Honors English student has been filling notebooks with short stories since preschool, and in high school, when Martin wrote her first novel, she said she promised herself that she would write another one for her senior thesis.

Martin has completed over half of a 130,000-150,000 word novel titled "Fathoms." The story follows Dindraine as she returns to her father's supernatural hometown in the Appalachian mountains. When the town's first visitor in over twenty-five years ends up dead, Dindraine must face strange gods and discover what's truly happening deep in the town's mysterious mines.

The story is the conclusion of Martin's four years at the university. In addition to her classical studies through the English department, Martin conducted research on a six-foot scroll called La Chronique Anonyme Universelle, which depicts history from the perspective of people in 15th century France.

"My background is in all of this mythology and all of this lost literature and everything. The basis of my thesis is really just a culmination of all of this and my love of creative writing and fantasy literature." Martin said.

However, this novel is a chance for Martin to finally move back to her creative writing roots and tell a story beyond her academic studies.

"I was the weird kid that sat in the back and read and was bullied," Martin said. "Like in ‘The Magician's Nephew,’ there's this place that's like the wood between the worlds, and it's all of these ponds that you jump in to get to other worlds. . . I feel like the real world is my wood between the worlds. It's just a way to get into these other worlds of these books."

Martin wrote “Fathoms” hoping that other kids like her would be able to experience the same level of comfort and escape in her story.

"Whenever I write, I just sort of remember like, the shy kind of sad little child that I was. I'm writing this book for all the other weird people that need a home; this is for them," Martin said.

With such creative control over her novel, Martin said she has taken care to write a story that builds upon the lessons she has learned about writing and represents a heroine that her younger self would look up to.

"I didn't want to be the princess; I wanted to be the knight," Martin said. "I want to be the one fighting things. So, my heroine is one that goes and fights things in a very knightly fashion."

Martin plans to finish writing her novel this summer and search for an agent after some final edits. She credits a first-year Honors class she took called The ABCs of Editing and Publishing with teaching her the fundamentals of the industry and thesis editors like Honors Dean Steven Lynn with getting her story to the place it is now.

Dean Lynn printed out over 230 pages of Martin's book before annotating it by hand.

"The level of support that I've gotten from the Honors College and people associated with it has been absolutely insane," Martin said. "And so this book is sort of a testament not just to the creative writing aspect of it, but like everything that I've learned."

As Martin graduates from UofSC, she plans to focus on writing and publishing her creative writing work and may return to graduate school in the future. She plans to continue the relationships she's created at UofSC.

"Just the connections that I've made, these people will not stop receiving my book. They are on the mailing list now," Martin said. ". . . I was at the right place at the right time with the Honors College, and I could not have written this book the way that it is any sooner than I did."

Sydney Dunlap is a freshman in the South Carolina Honors College majoring in journalism and mass communications. Originally from Greenville, South Carolina, she plans to pursue a career that combines her passion for writing and photography. She writes and takes the photos for her articles. 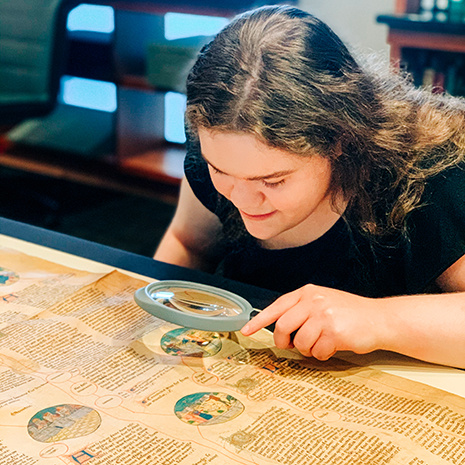 As part of her undergraduate research, Martin had the opportunity to examine the scroll called La Chronique Anonyme Universelle, which depicts history from the perspective of people in 15th century France.