Nicole Reilly, a fifth-year graduate student in the department of drug discovery and biomedical sciences at the College of Pharmacy, recently won first place and $200 in the student poster competition at the Environmental Mutagenesis and Genome Society’s 2016 annual meeting in Kansas City, Mo. The College of Pharmacy is one of only a few pharmacy schools nationwide involved with the genome society.

“I was really surprised (to win),” Reilly said. “It took a minute to sink in. It was really exciting.”

Reilly, 26, studies in the lab of Doug Pittman through the integrated biomedical science program. She was born in South Africa and emigrated to the United States at age 9, earning her bachelor’s degree in chemistry with a concentration in forensic science from Appalachian State University in Boone, North Carolina.

“Nicole is an exemplary student,” Pittman said. “She gives the most engaging presentations of any graduate student I’ve seen in our graduate program.”

Reilly started presenting research with a well-received talk at the Newton Symposium at the University of South Carolina School of Medicine—becoming the first first-year student in the integrated biomedical sciences program to do so, Pittman said. Throughout her graduate training, she has continued to present at department, college and university events, he said.

“In science, it’s common to go through a period when your work in the lab becomes challenging, and you don’t see the results you expect,” he said. “What sets Nicole apart is that when that happened a year or so ago, she worked diligently to overcome those obstacles and didn’t give up. The result of her efforts is not only the outstanding data that she generated but winning the award at the conference.”

Reilly presented the following three posters at the conference:

She received first place for her research involving RAD51D ubiquitination and also received a $700 travel award for her gene compromises poster.

Reilly became interested in studying RAD51D — a DNA damage repair protein — because of the association between its mutation and an increased risk of developing ovarian cancer. Ovarian cancer is often dubbed the silent killer because patients are not symptomatic until the disease has progressed to an advanced stage, and the five-year survival rate is just 46 percent, according to American Cancer Society statistics.

For her research, Reilly altered lysine amino acids in RAD51D genes to test the genes’ response and their ability to repair DNA damage, finding that the protein coding gene RNF138 interacts with and directs RAD51D ubiquitination — a cellular process in which defective proteins are destroyed and new proteins are created through a series of chain reactions. Studying cellular protein repair interactions is important because if researchers can understand those interactions and develop an effective DNA-damaging agent to target the RAD51D genes in cancer cells, those cells will be unable to repair themselves and die as a result.

Given the interest in her poster at the conference, Reilly said she is in the process of turning her presentation into a paper, which she plans to submit to peer-reviewed publications.

Reilly said she has thrived working for Pittman, who has challenged her to explore new ideas and sharpen her critical thinking skills and pushed her to go outside her comfort zone by making presentations. And she credits the collaborative environment at the college for yielding innovative projects. For instance, for her three poster projects, she worked with COP professors Mike Wyatt, Diego Altomare and Phil Buckhaults, among others.

“Everybody talks to everybody, and that openness within the department is what makes us so successful,” she said. 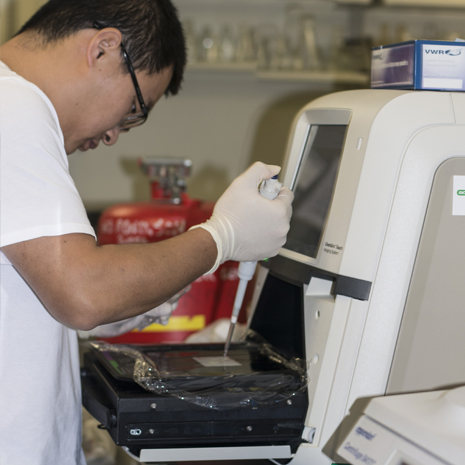