The University of South Carolina College of Pharmacy Class of 2025 received their white coats during a ceremony held Friday, August 20. Students gathered with a limited number of family and friends, along with the college’s faculty and staff, to embark on the voyage that will lead them to a Doctor of Pharmacy degree in just four short years.

Due to COVID-19 restrictions, students coated themselves and as they walked across the stage at the Koger Center, each signed the Pledge of Professionalism. They also learned the name of the donor who graciously sponsored the coat they received through a generous donation, as each donor’s name was written on a card and placed in the pocket of each white coat.

The meaning behind the ceremony was evident as students thought about what receiving their coat meant to them. Amber Burroughs of Columbia, South Carolina, says she has come a long way to reach this point in her studies.

“My grandmother, when I was growing up, had cancer. One of her doctors was a pharmacist and a physician,” she recalls. “As a little girl I would ask him questions and he would quiz me about her medications. That geared me towards choosing pharmacy as a profession.”

Jordan Franklin, from St. Matthews, South Carolina, says she has officially ‘made it.’

“All the hard work and dedication is paying off. Now it just means some more hard work! I’m very excited to start pharmacy school and to grow into a pharmacist,” she says.

Hinal Patel, also from Columbia, will be the first pharmacist and health care professional in her family.

“Today means a lot because we are starting a new journey,” she says. “I’ve been preparing for this throughout my whole life. So, it’s really exciting – a little bit of nervousness – but more excitement than anything else.”

Wear your white coat proudly. Never lose that sense of pride you feel at this moment, and never forget the responsibility that you now carry.

In her remarks to the new student pharmacists, Interim Dean Julie Sease reminded the students what the white coat represents - professionalism and knowledge, but even more than that.

“It also stands for trust – the trust that your patients and the public will place in your ability to provide the best care and the best information possible. Your patients will rely on you, even at moments when they are afraid, when they are at their most vulnerable, when they are in pain. You will become an invaluable resource for them.”

In closing, Sease also reminded the students that it would be a day they will long remember.

“Wear your white coat proudly. Never lose that sense of pride you feel at this moment, and never forget the responsibility that you now carry.”

The College of Pharmacy is grateful to our many donors and friends who supported this year’s White Coat Fund.

Leslie and William Gooding
in honor of Samuel A. Eaton

Wade E. Moose
in honor Of Dr. Emily A. Moose

Beth & Mitchell Sherr
in honor of Mr. Scott B. Sherr 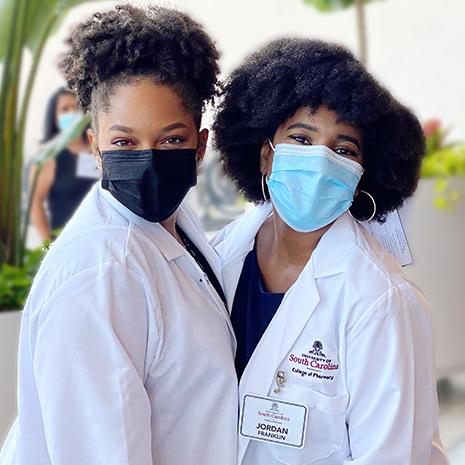 Browse our Photo Album from the event or watch the full live-stream video recording on our Facebook page.