‘Make the world a better place’

Julia Mims has learned over the course of her pharmacist career that the most important thing she can do to serve her community is to give back.

Because of her dedication to her profession, the University of South Carolina, and as a community leader, Mims was chosen as the 2021-22 Outstanding Alumna of the Year for the College of Pharmacy.

“I grew up in Lake City, South Carolina, where my uncle owned Corner Drug Store, and I was fascinated with all the bottles of medication,” she says. “He later sold the store to Sentry Drug when I was in high school, and I worked there while attending pharmacy school. At that time, most people preferred to talk with a male pharmacist. We’ve come a long way since then.”

Mims completed her bachelor’s degree in pharmacy in 1974 and worked the next few years in a hospital setting.

She got her first taste of working in clinical pharmacy when she took a position at the Medical University of South Carolina while her husband attended medical school.

“I felt like I got to use my knowledge more,” she says.

Eventually her family returned to Lake City, where she took advantage of the College of Pharmacy’s distance learning program and earned her Doctor of Pharmacy degree in 1996.

Mims did some of her rotations at Tuomey Hospital, now Prisma Health Tuomey, in Sumter, South Carolina, where she has been a clinical pharmacist for 24 years. She has served as the clinical pharmacy coordinator, works with the antimicrobial stewardship team, evaluates patient medication regimens, and serves as preceptor for students during their clinical rotations.

If we want to have good pharmacists in the future, we have to train them ... I had wonderful preceptors and felt it was my responsibility to give back.

“If we want to have good pharmacists in the future, we have to train them,” she says. “What better way to do that than have students come to your pharmacy or hospital and show them how the real world works? I had wonderful preceptors and felt it was my responsibility to give back.”

Mims is also passionate about giving back to her hometown, where she helped launch the Meals on Wheels program 33 years ago. She is an active supporter of the arts, serving on the Lake City Concert Series Board, among her many other volunteer activities. She is also vice chair for Florence School District 3 Board of Trustees, having served on the board from 1990-99 and again since 2011.

Mims is humbled by her selection as Outstanding Alumna of the Year.

“I look at the names who have received the recognition in the past and it is quite an honor,” she says. “It’s important to be a caring individual and try to make a difference, to make the world a better place. I think most pharmacists are like that. It’s what draws us into the profession.” 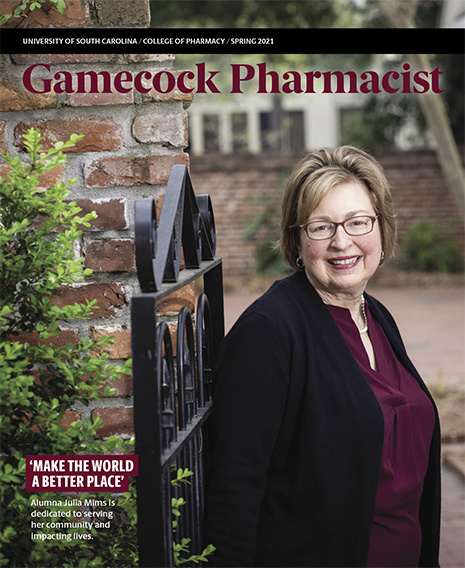 This article first appeared in the Spring 2021 issue of the Gamecock Pharmacist. Read more from this and previous editions of the alumni magazine in our online archive: