Diane and Andy McColl met as students in biochemistry class at the University of South Carolina College of Pharmacy.

“Andy and I sat next to each other in Dr. Beamer’s class” Diane McColl says. “I think he wanted to be friends so he could borrow my student I.D. to take Columbia College girls to the football games, but we hit it off.”

Andy McColl pursued a pharmacy degree after working in his hometown drugstore in McColl, South Carolina. And yes, he is distantly related to the town’s founder and namesake.

“I worked for T.D. Williams, and he was probably the most respected man in the town,” he says. “I thought pharmacy was the way to go. I got to deal with people every day, which I enjoy.”

Diane’s path to pharmacy school was more about job security.

“I didn’t have any personal experiences with pharmacy, but I thought we will always need pharmacists,” she says.

Andy graduated with his Bachelor of Science in Pharmacy in 1975. Diane earned her pharmacy degree in August 1976, and they were married in September. The newlyweds moved to Chattanooga, Tennessee, where they worked in retail pharmacies. At the time, Andy thought about opening his own pharmacy.

“One of the reasons I went to Chattanooga was to see how the competition and the chains worked. If I was going to be an independent pharmacist, I needed to know that,” he says.

The FBI was able to combine their law enforcement efforts with drug enforcement and that was a no-brainer for me ...

But fate had another plan in store. Andy decided to earn a law degree from the South Carolina School of Law, so they moved to Greenville, South Carolina, to qualify for in-state tuition. He and Diane continued working in retail pharmacies.

“I always had an interest in law, and it was just something I wanted to do,” he says.

Andy completed his law degree in 1981, then began searching for an opportunity to put both degrees to use. He applied to join the Federal Bureau of Investigation.

“The FBI was able to combine their law enforcement efforts with drug enforcement and that was a no-brainer for me.” he says.

In the meantime, he encouraged Diane to seek a law degree as well, as she had become a bit discouraged in the retail setting.

“There really was no opportunity to advance unless you became a supervisor over several stores,” she says. “That means you are on the road, and I didn’t want to do that. When Andy suggested law school, that opened so many more doors.”

Diane earned a scholarship and began her law studies. The FBI had a temporary hiring freeze, so Andy continued working as a pharmacist until April 1982, when he was sent to Quantico, Virginia, for 15 weeks of training.

Then, when Diane was expecting their first child during her second year of law school, life threw them another curve — Andy was transferred to Houston, Texas.

“We moved to Houston with a six-week-old baby and two dogs in July 1983,” Diane says. “And Hurricane Alicia hit just two weeks later!”

In the field office in Houston, Andy became one of the first members of the Gulf Coast Organized Crime Drug Enforcement Task Force, where he investigated a variety of cases, ranging from outlaw motorcycle gangs to Colombian drug lords.

Fortunately, Diane was able to complete her final year of law school in Houston, meeting all the requirements for the South Carolina School of Law, graduating in 1984.

That same year, the McColls relocated to Washington, D.C. Andy spent the next 21 years working on drug enforcement and public corruption cases and supervising the Strategic Information and Operations Command Center at FBI headquarters.

Andy was involved in several high-profile cases during his career, including the investigation into the drug-related death of former University of Maryland basketball star Len Bias and the corruption investigation of Michael Deaver, former White House deputy chief of staff who was accused of conflict-of-interest violations.

After graduation, Diane focused on public product liability defense work. With Andy’s transfer to the nation’s capital, she was approached by law firms intrigued by her background in pharmacy, encouraging her to consider food and drug law. She eventually joined the firm of Hyman, Phelps & McNamara, PC, the nation’s largest boutique food and drug law firm, becoming the firm’s ninth director and its first female director.

She was a member of the U.S. Pharmacopoeia Food Ingredients Expert Committee and served as president of the Council of the International Society of Regulatory Toxicology and Pharmacology, among other distinguished professional memberships.

I never could have become the type of food and drug lawyer that I am without my pharmacy education and experience ...

Both Diane and Andy credit their backgrounds in pharmacy for their success in their careers.

“I never could have become the type of food and drug lawyer that I am without my pharmacy education and experience,” Diane says.

“Our pharmacy degrees have been integral to everything we have done,” Andy says. “I had a unique niche in the work that I did. I helped bring a different perspective to the cases I worked.

“It’s a life lesson. You have to keep your mind open to other paths where you can use your pharmacy degree as a jumping point. You never know where your opportunities will come from.” 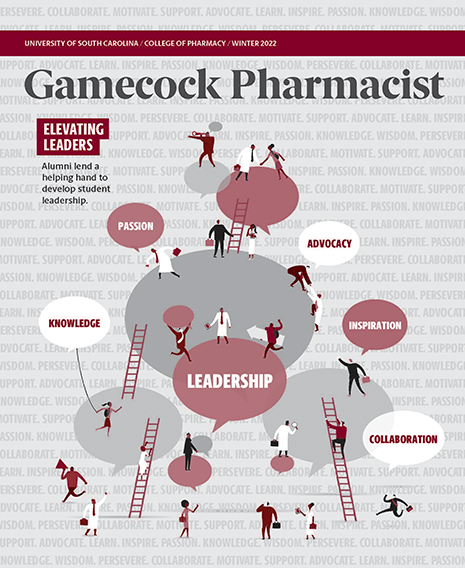 This article first appeared in the Winter 2022 issue of the Gamecock Pharmacist. Read more from this and previous editions of the alumni magazine in our online archive: