Paying it forward through mentoring

Tim Slone, ’84, has had a successful career, traveled the world, lived in many locations and had a lifetime of interesting experiences.

“I have worked at seven different pharmaceutical companies, lived in 10 different cities and had 25 different jobs,” Slone says. “To think I have done all these things and touched so many different areas, I never would have imagined it.”

Slone, who is vice president of global compliance for Novavax Inc., says he is “forever indebted to the university” and genuinely believes that were it not for the College of Pharmacy and his experiences in earning a master’s of pharmaceutical sciences, he would not be where he is today.

Slone came to the University of South Carolina after earning his undergraduate degree in chemistry from Mars Hill University in North Carolina.

After graduation, a friend who was also a chemistry major shared his experience working with a dye and finishing textile plan.

“He said the pay was good, but the hours were bad. … There was no air conditioning. It was not a great working environment” Slone recalls. “That made me think I would rather go to graduate school.”

A football teammate at Mars Hill had family in Columbia who offered Slone an apartment, and that is how he found his way to South Carolina.

I want to make students aware that there are many different paths down which a pharmacy degree can take them.

As his career progressed, Slone realized the importance of providing guidance to student pharmacists, so he accepted an invitation to speak to students in the Introduction to Pharmacy Pathways and Careers class, taught by Associate Dean for Student Affairs and Diversity Amy Grant. He also has taken part in the college’s annual Career Expo.

“I want to make students aware that there are many different paths down which a pharmacy degree can take them. They may often only think of retail pharmacy or clinical pharmacy. I want them to have exposure to the variety of things you can do,” Slone says.

Two students in the class of 2023 – Katie Paxton and Amanda Arenella – reached out to Slone to learn more about his career experiences.

“I came into pharmacy wanting to do a residency,” says Paxton, “but after hearing Tim speak, I decided to reach out to him for more advice. He is an outstanding mentor and helped me network to obtain two rotations for my P4 year in industry.”

Arenella was intrigued by Slone’s experiences as well and credits him for helping both her and Paxton to research pharmacy industry rotations.

“He reviewed our letters of intent, giving us pointers on how to improve and understand what companies would be looking for in an intern,” she says. “We knew that we could reach out to him at any time, and he was always available to help us.”

Slone hopes that other alumni will make themselves available to mentor students.

“What excites me the most is when you see the light bulb go on in their head, that ‘aha’ moment,” he says. “It made me feel good to know that I was helping them filter through the noise and distill it down to something they could identify with and made sense to them.”

Although the pharmacy curriculum is intense, it’s not all about textbooks and test scores, Slone says, adding that it’s important for alumni to share their experiences.

“Your career will not be handed to you on a platter, but you can be very successful,” he says. “Never turn down an opportunity that might stretch you and help you gain new skills or experiences. You never know where it is going to take you.” 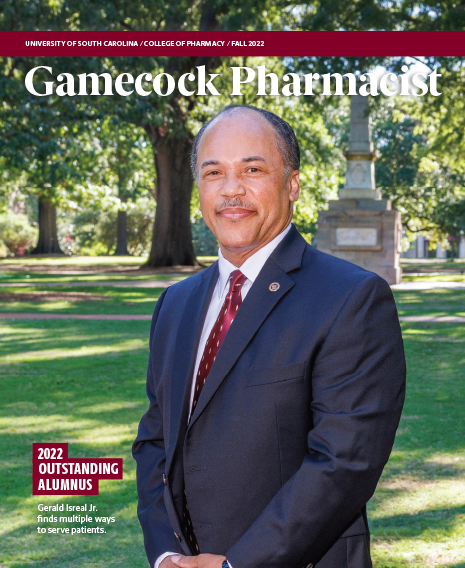 This article first appeared in the Fall 2022 issue of the Gamecock Pharmacist. Read more from this and previous editions of the alumni magazine in our online archive: