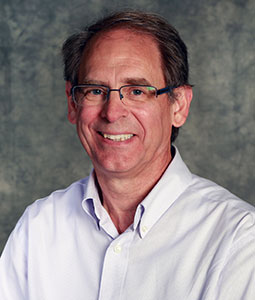 Rick Peterson has spent more than 30 years working in television news.  For a decade, he worked as a television reporter in Tulsa, Oklahoma.  And since 1999, he has freelanced as a story producer and supervising producer for the news desk at NBC News Channel in Charlotte, North Carolina. His stories are sent for use to all NBC affiliates across the nation and television networks around the world.  He worked as a web content producer for an NBC pilot project in 2009-2010 that involved more than 30 NBC affiliate websites.  During the 2012 Summer Olympics, Peterson managed the foreign news desk, filling in for producers sent to London.

Peterson has taught in the Broadcast Senior capstone program since 1997.  He enjoys helping students find ways to thrive in the high-pressure, deadline driven environment of TV news.  He was a finalist for the Michael J. Mungo Undergraduate Teaching award.  He has been nominated for two Emmy awards and has won awards from United Press International and the Society of Professional Journalists.

Reporting live outside our newsroom

Claudia Chakamian: That's why we do this job