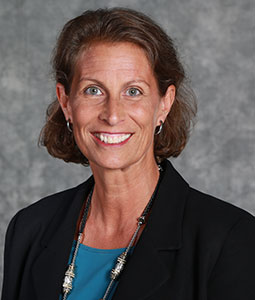 Smith joined the faculty in Fall 2015.  She has more than 25 years of broadcast industry and university-level teaching experience — specializing in Journalism and Mass Communications.  She teaches an array of courses focusing on multi-platform news, including writing, visual storytelling, newscast production and others.  Before teaching, Smith spent more than 12 years working in television, primarily local TV news.

Smith currently serves as a liaison between AEJMC and the Radio Television Digital News Association (RTDNA).  She is an active member of the Association for Education in Journalism and Mass Communication (AEJMC)’s Electronic News Division, recently serving as division Head (2012-2013), and is currently a member of AEJMC's Future of News Audience Engagement Committee.

Smith serves on the editorial board of the Electronic News journal as well as The Howard Journal of Communication.

She is currently a member of AEJMC's Committee on News Engagement

Smith lives in Columbia with her husband and daughter. She and her family are known for traveling the country during the summer — camping, hiking, swimming and seeing the world. She is an avid college football fan, loves to sail and has traveled extensively throughout the Caribbean.

Carolina Insider is a series of short newscasts featuring news and information with a hyper-local focus.

A peek behind the scenes of Power Producing»