A collaboration to promote social justice and educational equity in the classroom earns the College of Education and one of its professional development schools national recognition. The National Network for Educational Renewal awarded the 2018 Nicholas Michelli Award for Promoting Social Justice to Blythewood High School and the University of South Carolina’s College of Education.

The award was presented on October 11, during NNER's conference in Charlotte, North Carolina. This award recognizes an educational setting that promotes social justice, by increasing students’ access to knowledge and providing a nurturing learning environment for all students. The award was established by the NNER, the nation’s largest organization of partnerships between schools and universities engaged in improving the quality of education, to recognize educators who are committed to enhancing the lives of students and their families.

“We are so proud that the good work taking place within classrooms at Blythewood High School was recognized by NNER,” says Cindy Van Buren, director of the UofSC Professional Development Schools Network . “Dr. Jeffries and Dr. Reed have invested so much of themselves into this project and we are thrilled that our PDS partnership enabled this collaboration.

Blythewood High School (BHS) is one of 21 professional development schools where the College of Education has deep and sustained partnerships for teacher training and research. For four years, education professor Rhonda Jeffries has collaborated with Hope Reed, a BHS math teacher and Carolina education alumna, to study the effects of remediating students who score “below average” in math. Of those students, nearly all were African American and half were from economically disadvantaged families.

“We knew that research suggests that the tracking process used by our schools was actually delaying students even more, and sometimes was negatively influencing teachers as well,” says Jeffries. “It’s a self-filling prophecy of sorts. The students know they have been labeled as unsuccessful and don’t often apply themselves, and the teachers might not push these children to succeed as they would for a college-prep learner.”

The collaboration between Blythewood High School and our PDS network and education faculty has not only led to student success and equity in the classroom, but also a wealth of research about the effects of tracking and remediation on students which can improve education far beyond our state.

Though enrolled in what the school called a math foundations course, which was designed as a precursor to Algebra I, Reed quietly began teaching the students the Algebra I curriculum. At the end of the semester, the results were astounding - 90 percent (44 of the 49 students) passed the course.

The positive outcome led Reed and Jeffries to approach the school administration to discuss a formal change in the tracking process. Beginning in the 2014-15 school year, freshman students who would have been remediated in math instead received 45 minutes of seminar instruction separated from their peers who were tracked for college-prep algebra followed by 45 additional minutes of instruction in the classroom with their peers. In that year, 159 foundations students were placed in the new seminar/algebra combination course. At the end of the semester, 75 percent were passing the college-prep algebra class.

“Students were more confident. They started saying that, for the first time in their lives, they really loved math. This, to me, is a remarkable outcome. That is what teaching is all about,” she says. “Dr. Reed proved that all children can learn when given a chance, coupled with effective and culturally relevant teaching and support.”

In the 2015-16 school year, the school even boasted the highest Algebra End of Course test scores in its school district.

“The collaboration between Blythewood High School and our PDS network and education faculty has not only led to student success and equity in the classroom, but also a wealth of research about the effects of tracking and remediation on students which can improve education far beyond our state,” says Van Buren. 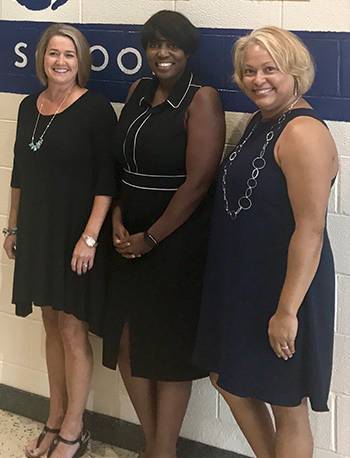 Learn more about the student outcomes.