Bierbauer honored with the Order of the Palmetto

Former College of Information and Communications dean Charles Bierbauer was presented with the Order of the Palmetto by Gov. Henry McMaster in a surprise ceremony on May 2.

The Order of the Palmetto is considered South Carolina’s highest civilian honor. According to the governor’s website, it is given to acknowledge “extraordinary lifetime service and achievements of national or statewide significance.”

Gov. McMaster lauded Bierbauer not only for his award-winning journalism career, but for his many contributions to the University of South Carolina and to the state. In particular, he commended the former dean for his role in moving the School of Journalism and Mass Communications into its new building and for his efforts launching Cocky’s Reading Express, the CIC’s childhood literacy initiative.

“Of all South Carolina’s newsmakers and newsbreakers, fewer command more respect than Charles Bierbauer,” said Gov. McMaster during the ceremony.

Tommy Preston, former USC student body president, nominated Bierbauer for the award. Though Preston was a political science major, he developed a close relationship with the dean when the two worked together to create Cocky’s Reading Express in 2005.

“Charles is a guy who grew up in Pennsylvania, has lived all over the world, and worked in our nation’s capital for most of his professional career,” Preston said. “However, you would have thought he was born and raised in South Carolina. His devotion to improving the lives of our state’s citizens is remarkable and a testament to the remarkable man he is. I cannot think of a more deserving person of our state’s highest honor.”

Preston, now director of national strategy and engagement for the Boeing Company in North Charleston, helped coordinate the ceremony by telling Bierbauer he was invited to a meeting with the governor to discuss literacy. Upon arriving, the former dean was instead greeted by nearly 20 of the college’s faculty, staff and alumni who were there to celebrate the occasion.

Afterward, the ever-modest Bierbauer acknowledged the significance of the award but pointed out that there are many others at the university working toward the same mission.

“It’s an honor,” Bierbauer said, “but there should be groves of palmettos recognizing all at USC who contribute to bettering education, communications and literacy.” 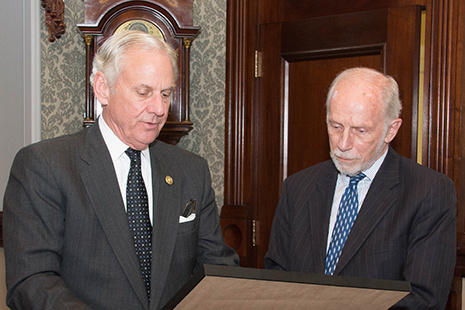 Charles Bierbauer is surprised by Gov. Henry McMaster with the state's highest civilian honor, the Order of the Palmetto. The event was streamed live on Facebook; you can watch it here.