A dean and a president

Posted June 4, 2018
By Rebekah Friedman, CIC communications manager
Top photo: The AAA had record attendance — and a strong showing from the CIC — at its annual conference in March.

Just months after taking the helm of the College of Information and Communications in August 2017, Dean Tom Reichert took on another new role: president of the American Academy of Advertising. The one-year term is much more than just a prestigious title. In fact, it will mean big things for Reichert and for the CIC.

Comprised of professionals and scholars who work in advertising and advertising education, the AAA is the premier home for advertising scholarship and research. According to its website, the organization “fosters research that is relevant to the field and provides a forum for the exchange of ideas among its academic and professional members.” The academy shares members’ research through its annual conference and a variety of publications, including the Journal of Advertising and the Journal of Current Issues and Research in Advertising.

Why is the dean’s leadership position with AAA an important step for the College of Information and Communications?

“Our goal is to continue to raise the reputation and profile of the college,” Reichert says. “Hopefully, being elected as president during my first year here at Carolina helps to shine more light on our faculty’s good work and the young scholars who recently joined the college.”

Reichert is the first USC faculty member to serve as AAA president. While the university’s attendance at AAA’s annual conference has traditionally been limited, the 2018 event saw a drastic increase in the CIC’s faculty presence. In addition to the dean, Instructor Jeff Williams and professors Linwan Wu, Sabrina Habib and Mo Jang all made the trek to New York City. Dr. Wu says that’s an important step forward for the CIC.

“AAA is one of the most important organizations that bridge the advertising academia and the industry both in the U.S. and around the world,” Wu says. “With Dean Reichert being the president and more faculty and students getting involved in AAA, USC will soon be recognized worldwide as a leading school for both advertising education and research.”

As president, Reichert hopes his term will kick off a new era for the organization, now in its 60th year. He says it was particularly meaningful for him to assume his duties in New York City, the historic heart of the advertising industry.

Goals for his term include planning next spring’s conference in Dallas, which he says will have an emphasis on cutting-edge research and speakers. The AAA is also planning an international conference in China in July 2019.

“China has more than 700 million smartphone users and is positioning itself to be a leader in artificial intelligence in the marketing realm, so we look forward to learning from them as well,” says Reichert.

He’s also excited to explore how the CIC’s expertise in data and information can influence the ever-shifting advertising landscape.

“Where advertising is concerned, technology and data have become a huge part of the equation,” Reichert says, citing examples such as big data, predictive analytics, artificial intelligence, and virtual and augmented reality. “It also raises a ton of issues, too, like privacy uses of data similar to what we saw with Cambridge Analytica.”

“This is the future, not just for advertising, but for communications,” Reichert says. “We’re one of only a few programs in the country that have had the foresight to integrate information science with communications, so I think we’ll be able to bring a lot to the table when it comes to forecasting where the industry is headed.” 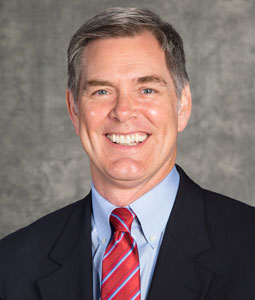