Support local — especially when it comes to news

Posted October 7, 2020
By Tom Reichert, dean of the College of Information and Communications

In September, the Union Times announced it was closing its doors after 170 years, citing the economic effects of COVID-19.

It’s a sad thing when newspapers like the Union Times close, but it’s no longer shocking. Newspapers have been plagued by declining circulation numbers and shrinking newsrooms for the past 15 years, and nearly a quarter have shuttered, according to a June report from the University of North Carolina at Chapel Hill. With a pandemic added to the mix, it’s likely that many other small-town papers will soon follow suit.

Researchers have a name for communities where daily newspapers have disappeared: news deserts. UNC’s report says 200 counties in the United States don’t have a local newspaper, and that number is climbing faster than digital news sites.

These communities might have access to national and world news thanks to the internet, but when it comes to what happened at last week’s school board meeting or how the county council voted or whether their tax dollars are being spent responsibly, citizens are often left in the dark.

That’s a problem, because local news drives civic engagement. It also gives local citizens information about local meetings and events. It also gives people a voice in how they’re governed and shines a light on injustice.

News deserts aren’t just less informed — they’re also vulnerable to the damage that can be done by decision-makers with unchecked power. And the voids journalists leave when their papers die create frightening opportunities for rumors or even deliberate disinformation campaigns to thrive.

Since COVID, I’ve seen my own community come together to support local businesses hit hard by the shutdown. One Facebook group dedicated to keeping Columbia restaurants afloat topped 10,000 members, and there have been coordinated efforts to spend money with the businesses that need it most.

Now, during National Newspaper Week, apply that mindset to local news, because just like the shops and restaurants that line Main Street, your newspaper is integral to the fabric of your community. It is a catalyst for change and a champion for transparency and truth — and there’s a lot at stake if it disappears.

In the end, news deserts aren’t good for local communities. So, subscribe if you don’t already. 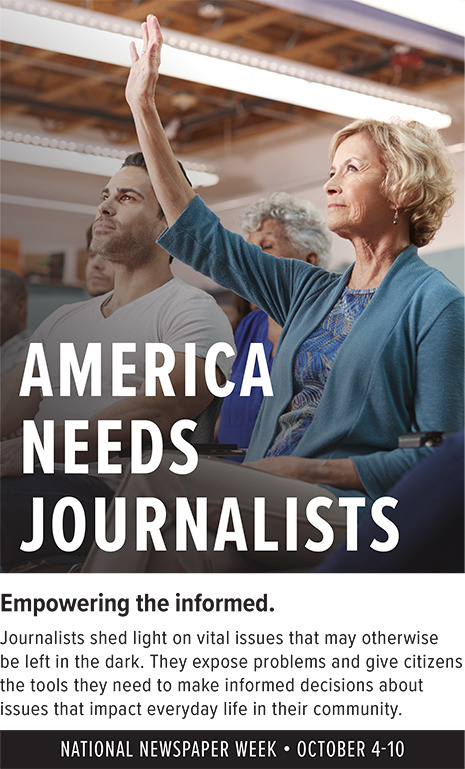 This 80th annual National Newspaper Week is a recognition of the service of newspapers and their employees across North America and is sponsored by Newspaper Association Managers.