In the T-Mobile #Ballogize ad, Steve Harvey, who mistakenly crowned the wrong woman as the winner of the pageant in December 2015, apologizes to T-Mobile customers for making a mistake, and then blames Verizon for the error.

DeLuca and Christou spoke about the T-Mobile brand and the making of the commercial with students in Bonnie Drewniany's Super Bowl of Advertising class.

Drewniany said Super Bowl ads are a time capsule of American society. "This year’s winning commercial is a perfect example because it borrows from recent headlines. Steve Harvey’s self-deprecating humor helped the commercial earn high marks in likability. The ad also had strong brand identity and a persuasive message about T-Mobile’s coverage."

Christou agreed. He said the ad showed a lightness and brand tonality and that “You can have fun with yourself, which creates likability." He felt the ad’s success was also due in part to the fact that almost everyone has experienced failure of some sort. “We have all made mistakes and to look at yourself and have a little fun with yourself is a good feeling, a delightful feeling that I think really resonated with people on an emotional level and a comedic level," he said.

DeLuca is responsible for bringing “Un-carrier” brand strategy to life through the development of all national advertising, social media and sponsorships and events. He oversees corporate media planning, buying and implementation, including traditional, digital, mobile media, social platforms and program integrations

Christou has 20-plus years in the advertising industry. He has won numerous awards including The One Show, Art Directors Club, AICPs, Clios and Best of Shows for Addy Awards, as well as AdWeek’s top spots and Creativity Online’s top pick honors.

The Cocky Award is given out every year by the Super Bowl Commercial class for what they determine is the best Super Bowl commercial of that year. The class judges the commercials on three categories: Likability, persuasiveness and brand identity. The commercial that receives the highest total score wins the Cocky award. 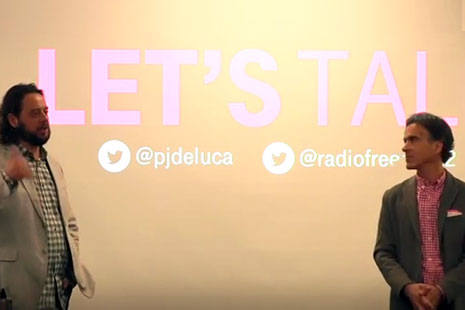 The Making of the Winning T-Mobile Commercial

Excerpts from the Cocky Award Presentation. Photos of students and Cocky with Andrew Christou and Peter DeLuca, recipients of The Cocky Award for best Super Bowl Commercial.

See all the previous Cocky Award recipients and watch their winning commercials.