Caroline Cann was grateful for the opportunity to be a part of two different Gamecocks athletics teams, but it was the resources available through the University of South Carolina that helped put her on the path to living her professional dreams as a sports broadcaster. Cann has earned an impressive track record when it comes to making the most of her opportunities in education, athletics, and now as a professional, and has landed a job with the National Football League's Indianapolis Colts as a multiplatform reporter and host.

"It will be very similar to some of the roles I was in at South Carolina as far as covering anything and everything about the Indianapolis Colts," Cann said. "That's practice reports, keeping fans in the loop about injury reports, and what players and coaches are doing on the field and maybe a little bit off the field. The Colts have three television shows, and I will be hosting 'Colts Up Close.' I will also host a twenty minute live stream that we do before each home game.

"It's basically taking fans where they normally don't get to go."

The Landrum, S.C., native began her collegiate career at Presbyterian College, where both of her parents had been student-athletes, before transferring to South Carolina because of the university's outstanding broadcast journalism program. After competing for one year as a high jumper on South Carolina's track and field team, Cann made the most of an unexpected opportunity to play her final season of volleyball eligibility in 2014 for the Gamecocks as well.

"I was playing open-gym volleyball one night with members of the volleyball team," Cann said. "That's when one of the graduate assistants saw me play and told coach (Scott Swanson) that they should invite me to practice."

It was always fun. That's because of the people.

This wouldn't be the last time that Cann would answer when opportunity knocked. In the competitive world of sports broadcasting, Cann used the skills she learned in the journalism classroom to become part of Gamecock Productions after hearing about it through a volleyball staff member. Gamecock Productions promotes all areas of Gamecock Athletics with high quality video productions, which can range from documentaries, behind-the-scenes pieces, hype videos and more, for use on stadium video boards, social media, television, and the athletics department web site.

"Caroline's determination to learn and always improve is, and will be, her best asset in this industry," said Paul Danna, Director of Gamecock Productions. "She is very creative, she can think on her feet if something goes wrong with the broadcast, and she wants to learn everything she can about the video process. Caroline understood the importance of learning all aspects of video production. She spent hours improving her editing and shooting skills and on-air delivery. The best part is that she made it appear as if it came easy to her, even though it didn't. She went from zero video experience to where she is now within two years."

Cann would later get her foot in the door with the SEC Network, as South Carolina's Live Operations Department produces all of the SEC Network+ broadcasts for the network's online platform in addition to many of the network's broadcasts of Gamecock sports on the linear (regular television) channel. Timing and opportunity were once again a good match for Cann's skills.

"She was very interested in getting in (sports broadcasting), and we saw an opportunity to give her a shot a known sport to her, beach volleyball, where a sideline reporter might lend itself nicely to adding to the broadcast," said Justin Stoll, Assistant Director of Live Operations. "We were not under the same scrutiny of our other shows since it was not a `SEC' sport. She brought a fresh look at the broadcast to tell the stories of both the Gamecocks and their opponent. To me, the first broadcast was a tryout. Did she care, would she do the work, could she take criticism, could she provide additional content to the production? All of those questions were answered with a resounding `yes.' "

"She put in the work to get better," added Director of Live Operations David Cockfield. "Yes, the network does not like student talent and we pushed the envelope putting her on air for volleyball before she graduated. Almost every time she was on air, she was in the office the next day looking for criticism and advice."

"The SEC Network is great for a lot of people for a lot of different reasons," Cann said. "For sports fans, obviously they can see more of their team. For me, it was great because I was doing things for the SEC Network before I even graduated. I was working with real producers with years of experience. David and Justin were great. They just told me that this was an opportunity to learn."

After graduating in December of 2015, Cann became a regular on SEC+ broadcasts as a sideline reporter for multiple sports, conducting interviews and was even pressed into service as an analyst for a South Carolina women's basketball broadcast. Needless to say, she had to learn a lot about many sports in a short time.

"I worked indoor volleyball, women's basketball, beach volleyball, baseball and softball games," Cann said. "I had the chance to put that all on my resume at 23 years old. That's just unheard of. When I'd go on interviews, they look at me and say `wow, you've done so much already.' It's all because of South Carolina and the ability to get involved in everything, and the opportunities I've had covering all of those sports in the booth and on the sideline and understanding what it takes to get ready for a broadcast."

Cann wasn't afraid to reach out to professional broadcasters, locally as well as those travelling to Columbia from other networks, to learn how to better prepare. Perhaps the defining moment of the now 24-year-old's young career came last spring when she was asked to serve as the co-host for SEC Network+'s live broadcast of South Carolina football's Pro Day. Cann was well prepared, and even overcame some technical glitches which would have easily thrown off most young broadcasters.

"When Pro Day was over, I turned around and looked at where I was and just said `wow,' " Cann said. "Our playback monitor went out, and we couldn't hear in our ear pieces (to the production room) sometimes, and there were no commercial breaks. That was live television. When we were done, the producers were happy. Everyone was happy. A year ago, I was watching (SEC Network studio host) Maria Taylor host Pro Day, and a year later, I had a chance to co-host it. I learned so much."

With her success, Cann is also glad to talk about the days when things didn't always go as planned.

"The first beach volleyball tournament that I worked, I wasn't fully aware that I would actually be on-camera," Cann laughed. "I thought I was just going to relay information to the people in the booth. It's probably better that it happened that way. so I didn't have time to get nervous.

"It's weird to say that you are prepared for mistakes, but I knew that one was coming. Things were sailing along too smoothly. I was working a softball game, and I was talking about (South Carolina) swimmer Akaram Mahmoud who is in the Olympics. I could not get the name out. I mean, he's in the Olympics, and I couldn't say his name! I redeemed myself at a baseball game, though. Now, I will never forget how to say his name."

"Caroline took everything in stride," Stoll said. "There were bumps in the road, but never the same bump twice. She was always eager to hear criticism. She was forever in our office watching the games back and asking pointed questions on how she thought she could improve and was willing to listen to suggestions and learn from all experiences she gained through her time with us."

Now that she is moving on, Cann is thankful to everyone at South Carolina who helped her along the way.

"It was always fun," Cann said. "That's because of the people. Everyone I worked with on the broadcasts was great, and then I'd walk into the (Gamecock Productions) office the next day, and they would say something about the game. I valued their feedback, and it was fun to be in an environment where I felt fully supported."

Cann also has a message for current students who are chasing their professional dreams.

"Use your resources," Cann said. "I wouldn't be in the position that I am in if I didn't tell my volleyball coaches what I wanted to do and asked if they knew anyone who could help me get started. There are always opportunities and people that want to help you. At the end of the day, I had the athletics director and the football coach on my side, helping me. I don't think every university is like that, but at South Carolina, they are." 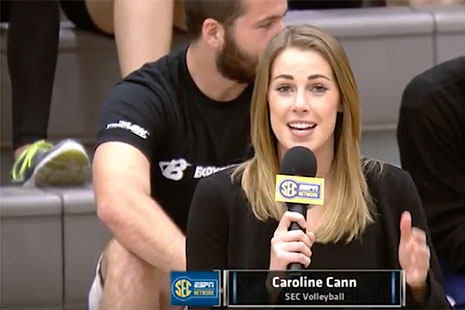