What is the secret to success in an industry dominated by experience? And how does a twenty-three-year-old acquire it?

Harper’s job includes everything from writing policy initiatives to managing the Mayor’s Fellows, a program she participated in during her junior year of college that allows students to assist in policy research and special projects for the city. She met the mayor through this program.

At USC, Harper held leadership positions in Student Government, Omicron Delta Kappa, the Multicultural Assistance Peer Program, the Public Relations Student Society of America and many other student organizations on and o campus. During her four-year experience, she worked multiple internships, including one with South Carolina House of Representatives member Mia McLeod, where she managed McLeod’s social media and assisted with campaign events. Harper’s internship with Representative McLeod is what started her journey into government, where she ended up “by accident.”

Harper credits her successful balancing of schoolwork and extracurricular activities to sleep. She says, "There is no secret, I just can’t get anything done when I’m cranky and I don’t want to talk to anyone.” Sleep and, of course, time management were two of her biggest priorities while in school and still are in her career today. She says, “prioritization is a big part of my job, and when I’m handed a stack of things I need to do, I have to narrow down what needs to be done within the hour, and what needs to be done in two days.”

After observing her leadership as a student, I sought her out to join my staff.

Harper frequently deals with policy initiatives for the City of Columbia. She is working on a program called Books to Boys that provides free books to boys in the Richland County area to make reading sound exciting and appealing and to help close the opportunity gap. Harper also visited the D.C. Central Kitchen in Washington, D.C., to learn more about a job-training program that teaches culinary skills, as well as self-empowerment classes and resume building workshops. “This program has an 80-90 percent success rate in the D.C. area, so we’re trying to see about implementing the same type of training in the Columbia area,” Harper says.

Harper believes the two keys to success are hard work and prayer. She says, “Having a job that you love makes such a difference in creativity and productivity, and I feel so blessed to have a job that I love.” Harper hopes to one day be the “best speech writer in the world,” or to own a consulting rm. She strives to be the MVP on any team she belongs to and to always make herself the most memorable person in the room. 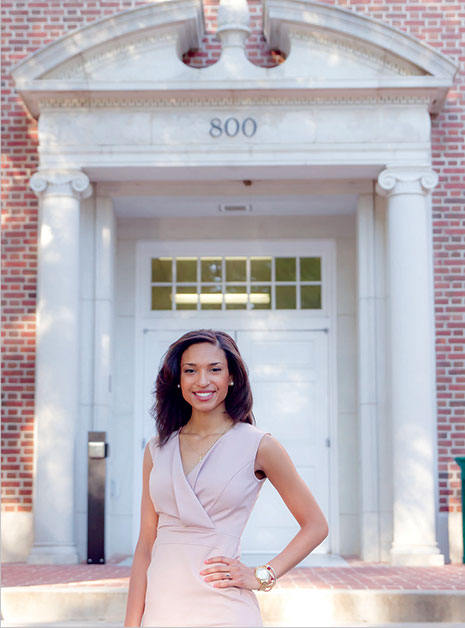 Lauren outside the new School of Journalism and Mass Communications building after graduation.