Fake news. It’s the new buzzword of the media industry, leaving some people wondering what is fake news exactly.

Journalism professor Ernest Wiggins and Dr. David Lankes, director of the School of Library and Information Science, led a conversation with students and faculty on Feb. 2, at the School of Journalism and Mass Communications.

At the event, "Fake News: Lunch, Learning, and Leadership," the professors discussed what fake news looks like, how to avoid accidentally proliferating it when covering a story and the potential dangers of fake news.

“Fake news is not all fake. The charges of fake news are sometimes attached to stories that are 90 percent true — with some problems,” said Wiggins.

The session took place as part of the university’s Leadership Week, which is a weeklong, campus wide series of events. Multiple colleges, offices and libraries sponsor activities, seminars, panel discussions, and performances. Undergraduate students can attend these activities as part of their enhancement activities needed for Graduation with Leadership Distinction.

Desirae Gostlin is a first-year Master of Mass Communication student. Her reporting has been featured in The Waterfront and Lexington Life Magazine among others. 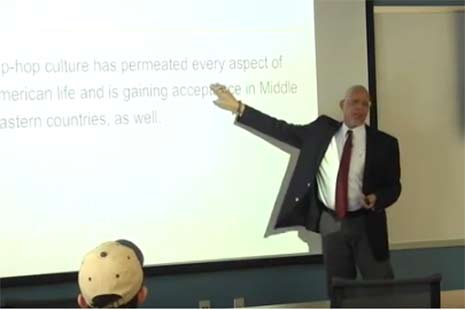 Part one of the session on fake news. The link to part two - questions and comments from students and faculty - is available at the end of this video.