It has been a wild March ride for South Carolina’s men’s basketball team as the Gamecocks danced their way to a Cinderella run. The next stop for Carolina is Phoenix, Arizona and the Final Four.

It has also been a madcap adventure for two University of South Carolina School of Journalism and Mass Communications students.

Nic Jones and Brian Principe, both senior broadcast journalism students, have covered the team since the beginning of the tournament run in Greenville, South Carolina, for Carolina News.

Carolina News is the daily television broadcast that is run entirely by students in the Capstone program of the journalism school. The show can be seen live on campus television or via a stream online.

They have put together game previews, game recaps, Twitter updates, and full locker room reaction from every game during the 2017 NCAA Tournament.

Following two wins in Greenville over Marquette and Duke, the Gamecocks advanced to their first Sweet Sixteen in program history. Jones and Principe made the trip to Madison Square Garden to report on the astonishing victories.

For the New Jersey-born Principe, the drive back up the East Coast was surreal. Principe spent his youth attending games with his family in New York.

“Some of my favorite memories as a kid revolve around going to games at Madison Square Garden,” Principe said. “Covering a game there was a dream come true.”

The Gamecocks continued to shock the college basketball world winning against Baylor and Florida in New York on their way to the Final Four. Jones and Principe were on the court capturing the moment Coach Frank Martin and Sindarius Thornwell cut down the nets in celebration.

After covering the first four games, Jones and Principe became eligible to apply for credentials for the Final Four in Arizona. They were approved and will be sent to University of Phoenix Stadium by the SJMC.

Jones, who is pursuing a career as a television reporter, knows this historic sports assignment is one reporters across the country would envy.

“Truly, it’s a blessing to have these opportunities through the journalism school,” Jones said. “To have the chance to cover the Final Four is an experience I will always treasure.”

Pre, post, and locker room coverage can be found via the Carolina News Twitter page and on Carolina News broadcasts throughout the week. See online streams»

Through all the madness that will culminate this weekend, keep an eye out for Jones and Principe, two seniors finishing out their Cinderella run through the NCAA Tournament. 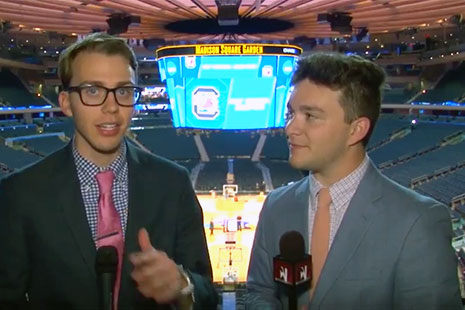 Students Nic Jones and Brian Principe reflect on their experience covering the 2017 NCAA Basketball Tournament and going to the Final Four in Phoenix for the School of Journalism School and Mass Communications.