The South Carolina Public Relations Society of America honored students from The Carolina Agency  with two Mercury Awards and recognized a recent graduate as the most outstanding public relations student in the Palmetto state. The students were honored at the association's annual celebration on May 4 in Columbia.

The students developed a comprehensive web site in Etsy and on Naturally Carolina’s own domain in addition to creating and executing an integrated marketing campaign for the sustainable soap product.

TCA veteran Tyson Blanton (PR 2016) was honored by SCPRSA for her work both inside and outside of the classroom with the PR Student of the Year award.

Blanton, who graduated with a perfect 4.0, served as an account executive with The Carolina Agency and as president of USC's Public Relations Student Society of America. She also held an internship with the the university's media relations department, which hired her to work full time while still a student. Blanton was introduced by Dr. Jeff Ranta, TCA faculty advisor and SCPRSA board member.

“It was a great pleasure to introduce Tyson as a winner for this award," Ranta said. "She has been an exemplary young professional who has done great things as a student here and is sure to do more great things as she enters the work force.”

“Tyson is exactly the type of graduate every public relations program aims to produce,” said Grigg. “She sets a shining example for future winners.”

The Carolina Agency at the School of Journalism and Mass Communications is a full-service agency run by students and is affiliated with PRSSA. Because its student members are pursuing majors from several colleges at the USC, TCA is able to offer a broader range of possibilities than a traditional public relations firm. 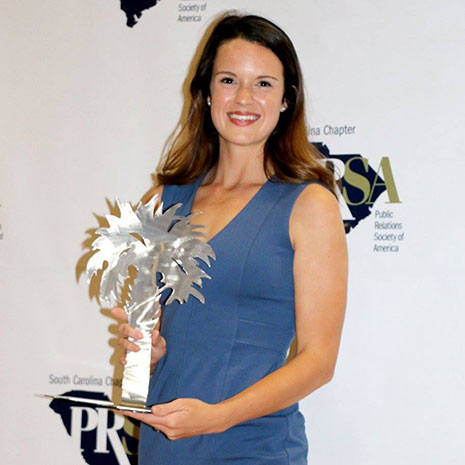 Tyson Blanton (PR 2016) was named Public Relations Student of the Year for her work with The Carolina Agency and USC's chapter of the SCPRSA.