Four Gamecocks thrive in their experience between the hedges

While the Gamecocks may have lost a tough game on Nov. 4 against the Georgia Bulldogs, four students walked away with a big win — an amazing, immersive media experience covering the highly anticipated game.

Carolina News is a daily, live television newscast run by Senior Semester students in the School of Journalism and Mass Communications's capstone program. Chakamian partnered with a UGA broadcast student to provide a point-counterpoint perspective of the game, while Anger and Buniel delivered a game preview from Sanford Stadium. Both packages aired in Friday's newscast.

During the game, Jeffers, Anger and Chakamian took pictures and video from the sidelines, and Buniel gave live Twitter updates and analysis from the press box. Afterward, they filmed the post-game press conference and put together a game recap.

The four students were allowed to cover the away game after working previous games at USC's Williams-Brice Stadium. This semester is Buniel's first time covering football games.

"The feeling you get standing on the sidelines doing what you love, surrounded by tens of thousands of fans whose cheers echo for miles, is like no other," she said. "I have no idea how I got to be so lucky to gain such wonderful experience."

Chakamian has been covering football games for different organizations since her freshman year, and there's nothing she loves more than the opportunity to be on the sidelines capturing the plays and emotions of games.

"Covering sports is something I've always loved doing and getting the chance to travel to other stadiums is such an amazing experience," she said. "There's nowhere else I'd rather spend football games than on the sidelines, and I'm so lucky to have traveled for this trip."

Jeffers, a junior, was asked to accompany the Senior Semester students to capture photos from the game.

"Having the opportunity to travel to Athens was absolutely incredible," he said. "Getting to experience and photograph a game from the sidelines at Sanford Stadium was surreal and is something I will always remember. I am so lucky to have been able to go on this trip!"

Due to prior commitments, Anger almost missed the trip. But she's glad she was able to work it out.

"The idea of not going made me upset," Anger said. "I love doing this and everything about it. The environment, the experience, what's not to love?"

Carolina News will continue to provide coverage of future football games and more, which can be accessed on their website Dateline Carolina, Twitter and live television broadcasts on campus channel 4.2. 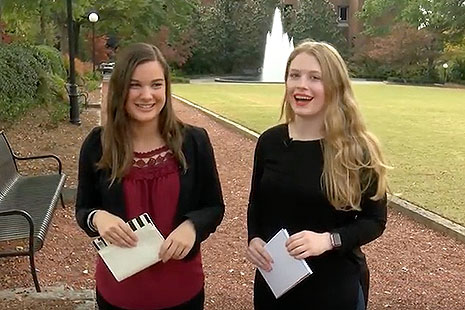