When Mary Ann “Mimi” Wilkinson Cunningham graduated from the School of Journalism and Mass Communications (B.A. ’68, M.A. ’75), she was ready to launch a successful career in public information. Her path eventually led to UNC Wilmington, where she played an instrumental role in advancing the university’s reputation as its public information officer.

Now retired, Mimi and her husband, Tom, support the CIC in a multitude of ways. Though Tom is an N.C. State alumnus, he and Mimi both understand the role that donors play in promoting student excellence.

Below, Mimi explains the difference that her UofSC J-school education made in her life and shares why she and Tom have chosen to give back.

Tell us about your career. And as a UofSC alumna, how did you use your journalism degrees?
My journalism degrees provided the writing framework for a career primarily in public information. Excellent communication skills were important to each job I held over 38 years of work, whether as a grant writer, in corporate communications, or in university relations at a state university. My education at USC gave me a good foundation and opened the door to a 26-year career in higher education at the University of North Carolina Wilmington.

What was the most interesting or significant thing you did in your career?
Building the reputation of UNCW locally, statewide and nationally was a focus of my work, and U.S. News & World Report rankings continuously improved during my tenure. I arranged press coverage of many outstanding academic endeavors.

Among the most interesting were several underwater press conferences at the world’s only undersea research laboratory, Aquarius, moored off Key Largo, Florida, managed by UNC Wilmington. Another was a luncheon for the U.S. Congress to offer them a taste of summer flounder raised through the UNCW mariculture program.

Perhaps the most lasting accomplishment was helping with a statewide public education campaign about the $3.1 billion higher education bond issue in 2000 which passed with 73 percent of the vote. This funded a surge in campus academic buildings across North Carolina. I’m most proud of organizing a three-day, 16-county, 600-mile bus trip across Southeastern North Carolina. Three UNC system chancellors and 13 community college presidents participated in 12 rallies during the trip.

Most meaningful to me was supervising the more than 150 student interns who matriculated through my office working 20 hours a week doing REAL work for academic credit.

What are you most passionate about in the journalism industry? Are there ideas or causes that you’ve advocated for?
I am passionate about the public’s right to know what is happening at public institutions. My work ethic focused on giving prompt, complete and accurate information whatever the situation, of course operating within the guidelines of student, faculty and staff privacy constraints.

What did you learn while in school at the CIC that still resonates today?
Good writing and communication skills are beneficial over one’s lifetime, whether working in a journalism-related field or being part of a volunteer board or activity.

Do you have a favorite professor or memory from your time at the CIC?
My favorite professor was Dr. Reid Montgomery whom I first met when he was leading a conference for high school newspaper editors. He influenced my coming to USC to major in journalism, and later I became his graduate assistant. He served as executive director for the SC Press Association, and I edited its newsletter as part of my job. I’ll never forget one memorable headline I wrote about a Greenville-based media corporation — Multimedia Goes Pubic. I wasn’t fired but instead learned the critical importance of proof reading. Also, my first job in the public information field resulted from an unsolicited recommendation by a press association member I knew who told my prospective employer that I had just moved to Raleigh and would be a good hire.

How was your program different then than it is today? How has the industry grown and changed?
Electronic communication has totally changed the university news business. When I first started at UNCW in 1982, I would drive around town and hand deliver news releases on Friday afternoons following any action of the UNC Board of Governors that impacted UNCW. Now media lists are all on computer, and the push of one button sends the release out locally or all over the world if warranted.

News from the university was most always given good coverage on television, radio and in newspapers. Now with shrinking news space, coverage has shrunk unless there is a major scandal or disaster. Of course, the university can now control and target its own news dissemination through social media and other means of electronic communication.

For many years, you have supported the college in a variety of ways, including student scholarships, the new J-school building and the Dean’s Circle Society. Why do you give?
I experienced first-hand the generosity of scholarship donors when I received an SC Press Association scholarship in 1964 to help pay for my freshman and sophomore years. This was important financial assistance for me and my family. Plus, I was always invited to the Press Association winter meeting banquets and the Press Association Women’s breakfasts where I got to meet important professionals in the field. In addition, my husband’s NASA fellowship allowed him to complete his graduate degree as did my graduate assistantship.

When I started working at UNCW, the public information function was in the Advancement Office, which was responsible for fund raising for scholarships and institutional support. Providing news coverage of donors and recipients gave me an inside look at the impact and importance of philanthropy to an academic institution.

When my husband and I became financially capable of becoming donors, our universities were first on our list for donations as we both recognized that without our educations, we would not have accomplished what we have in our careers. We have chosen to use our resources to impact those who come after us with scholarship support as well as helping with improved facilities when appropriate.

Another important factor was that my husband’s company, through the GE Foundation, provides a matching gift program that enables us to double the amount of our gift. Over the years we have taken full advantage of that program.

What would you say to someone who is considering joining the Dean’s Circle Society or supporting a scholarship?
Give what you can when you can. It is not the amount of money, but the commitment to the university that is important.

Is there anything we haven’t asked that you’d like to share?
I am deeply appreciative of the education I received at the University of South Carolina and the life lessons I learned during my time at university. I’m fortunate to have learned the importance of philanthropy and glad to have assets to share. It was especially meaningful to my husband and me to be able to endow a classroom and broadcast control room in the newly renovated journalism building.

When I was at USC, the journalism program moved from Legare College on the Horseshoe to the then-modern coliseum. As that facility aged and became depressing, it was a pleasure to be part of the changing dynamics of the new building.

I encourage new and current donors to consider leaving a legacy to the university through a bequest in one’s will. Tom and I have both done that, and it’s fun to be invited back to USC for Guardian Society events. 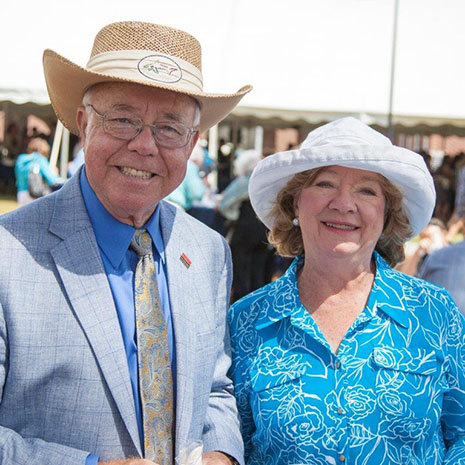 This society is one of the most loyal groups of CIC supporters.

Dean’s Circle Society members are recognized throughout the year with special invitations to private receptions with guest speakers.

Our members have opportunities to serve as college ambassadors and receive regular communications from the dean and school directors.

Contact us for more information on supporting the college.