As part of the South Carolina Library Association Annual Conference, alumni of the UofSC School of Library and Information Science gathered for a reception on October 22 at the Columbia Marriott. The event gave attendees a chance to catch up with each other, learn about community outreach and — most importantly — to remember alumna Cynthia Graham Hurd, who died in the June Charleston church shooting.

The highlight of the evening was the announcement of the Cynthia Graham Hurd Endowed Fellowship Fund, which will be awarded to individuals associated with the Charleston County Public Library System as part of the SLIS diversity program.

Dr. Samantha Hastings, director of the school, announced the fellowship and introduced members of Hurd's family.

"Cynthia Graham Hurd will always be remembered as a great librarian and supporting alumna of our school.  This fellowship will keep her memory alive and help us recruit more librarians like her — with hearts and souls dedicated to connecting people with the information they need," Hastings said.

Hurd graduated from the School of Library and Information Science with a Master of Librarianship in 1989. She worked for the Charleston County Public Library for more than 30 years, becoming manager of the St. Andrews Regional Library in 2011.

Cynthia Graham Hurd was born June 21, 1960, in Charleston, South Carolina, and was entered into eternal rest on June 17, 2015, just five days shy of her 55th birthday.

She attended Immaculate Conception School, James Simmons Elementary School and the High School of Charleston before attending Clark Atlanta University, where she graduated with a bachelor’s degree in mathematics. She returned to Charleston and began working for Charleston County Public Library in 1984. Her love of books and public service led her to pursue her master’s degree in Library and Information Science from the University of South Carolina, all while continuing to work at the Charleston County Public Library.

Her service to the public and leadership skills led to advancement, and she became branch manager for the John L. Dart Branch, a position she held from 1990-2011. She was promoted in 2011 to become manager of the St. Andrews Regional Library, one of the busiest branches in CCPL’s 16-branch system. She was known for her commitment to public service and her desire to help people through all phases of their life, which may include providing advice and assistance beyond that roles of a typical librarian.

While working at CCPL, Hurd shared her expertise and skill with students at the College of Charleston, taking a part-time librarian position at the college’s Addlestone Library in the 1990s.  Hurd’s influence reached beyond the library through activities in several community organizations. She was a member of Alpha Kappa Alpha Sorority Inc., served on the Housing Authority of the City of Charleston, for 21 years, serving as Vice Chairman from 2001-2003, was active in Mother Emanuel AME Church and spent time helping the community’s residents through outreach efforts and service with other local groups.

Hurd has been honored by the College of Charleston, where she was the longest serving part-time librarian. The school’s Board of Trustees renamed the Colonial Scholarship, a full academic scholarships for in-state students, the Cynthia Graham Hurd Memorial Scholarship. Twelve are awarded each year. 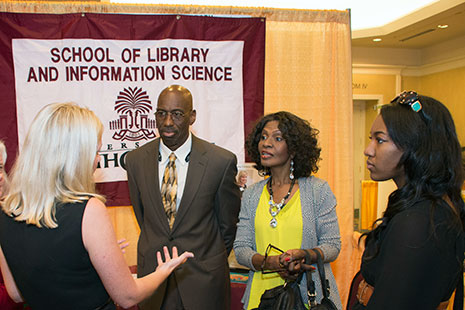