After almost 30 years at Syracuse University, writing over 40 book chapters and journal articles, Dr. R. David Lankes is joining the University of South Carolina as Director of the School of Library and Information Science on July 1. “Professionally I have always worked best in a team of creative folks and outstanding researchers. I found that at the College of Information and Communications and in the School of Library and Information Science,” Lankes said.

From winning the 2012 ABC-CLIO/ Greenwood Award for the Best Book in Library Literature for his book The Atlas of New Librarianship, to being a recipient of the American Library Association’s 2016 Ken Haycock Award for Promoting Librarianship, Dr. Lankes has contributed much to the library field. “I'm a big believer that my success is not measured in the things I produce, but in the success of others. As an administrator, my success is measured by the success of the faculty and staff I support.”

While traveling the world this past year and learning what librarians are capable of, Dr. Lankes has recharged his creative energy. He witnessed the restoring of manuscripts at the Vatican Library, observed an open debate in Belgium between ministers of culture, experienced the process of integrating a turbulent past into an optimistic future while in New Zealand, and reaffirmed his faith in the power of librarianship when visiting Australia, Canada, the Netherlands, and Pistoia, Italy. Dr. Lankes stated, “Simply put, when you encounter smart people dedicated to doing good and doing well you are simply moved to action.” He hopes to connect his world travel experiences with the passions and experiences of the USC faculty members in continuing to evolve curricula.

Upon entering his first year of college at Syracuse University, Dr. Lankes intended on being an illustrator. However, he realized drawing was strictly a hobby of his and, instead, discovered a passion for developing computer applications. Dr. Lankes began his doctoral program at Syracuse University during the growth of the Internet as a resource. “It was simply a playground for a geek like me,” he said.

Asked what he wished more people knew about the School of Library and Information Science, Dr. Lankes replied, “Ask me in a year. I have a lot of listening and learning to do first.” 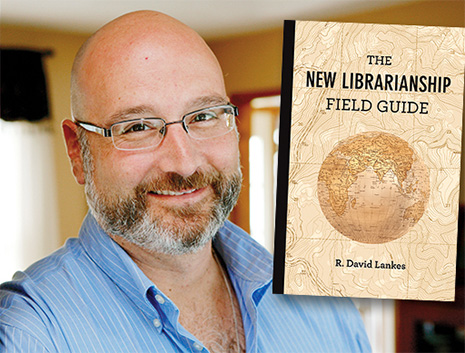