Anntwanette “Netty” Sulton has wanted to be a librarian since fifth grade. She can't pinpoint the exact moment she realized this but says that at a certain point she understood that it was the path she wanted to pursue.

From fifth grade to ninth grade, she says she “volunteered at the library every summer, all summer," furthering propelling that dream into action. Now, Sulton is in her final year as an undergraduate in the information science program at the University of South Carolina. She's made the President’s Honor List for consecutive semesters and has an exciting path ahead.

A native of Columbia, Sulton says that the university has always felt like home to her. When not working, she enjoys yoga and reading and says that the Riverwalk is one of the best spots to walk and relax in Columbia.

When asked about some of the achievements she is most proud of during her time as an undergraduate, Sulton lists the Information Science Student Association’s renewal in her sophomore year. She loves the community element that it offers students in the program and hopes to see it continue growing.

Sulton elaborated further on the community aspect of the program saying it is a big part of the information science experience to know your peers and faculty. She says “[this] major is like a family” and says students benefit from the “one-on-one personal connection” that it offers. She specifically names Elise Lewis, Vanessa Kitzie and David Lankes as faculty members who have helped her along the way and given her the chance to ask career, education and life questions.

Looking ahead, Sulton has plans to attend graduate school starting in early 2022 with the end goal of getting a Ph.D. in library science. Her dream job is working for the Library of Congress. Though this is her final year as an undergraduate student, she is excited to see how the program flourishes in the coming years. Her hope for information science moving forward is that the greater campus community sees how strong the program is through the achievements of faculty and students.

Elle Boyle is a social media intern for the College of Information and Communications. She is a junior information science major with a minor in applied computing. Upon graduation, Elle plans to pursue a career in technology. 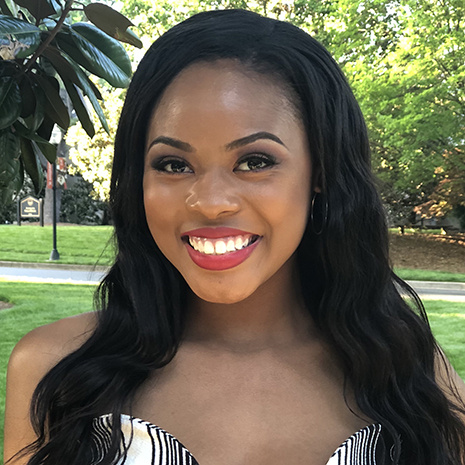 Best study spot on campus? The Student Government room in Russell House or the conference room in Davis College.