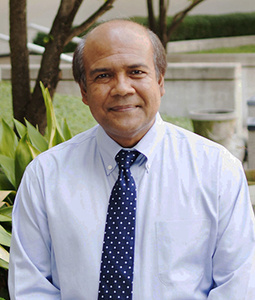 Dr. Mohammod Ali is a professor in the Department of Electrical Engineering at the University of South Carolina (USC). Just prior to his tenure as department chair in August 2021, he worked as a Program Director under Intergovernmental Personnel Act (IPA) assignment at the National Science Foundation in the Electrical, Communications, and Cyber Systems (ECCS) division at the Directorate for Engineering in Alexandria, VA for 2 years.

He then went to work for Ericsson Inc. in Research Triangle Park, North Carolina from 1998-2001. Prof. Ali started his academic career at USC in August 2001. He spent a year on sabbatical in 2013-2014 at the Air Force Research Laboratory (AFRL) at the Wright Patterson Air Force Base (WPAFB), Ohio. In the summers of 2010 and 2011 he was a Summer Faculty Fellow at the AFRL. Prof. Ali also held a visiting appointment at the Motorola Corporate EME Research Laboratory in Plantation, Florida in the summer of 2004.

He is the recipient of the 2003 National Science Foundation Faculty Career Award, USC College of Engineering and Computing Young Investigator Award, Research Progress Award, and the Samuel Litman Distinguished Professor Award. He has graduated 23 students (12 Ph.D.) and is the author/coauthor of one book and over 200 publications and 8 granted US patents. His research has been funded by the Army Research Office (ARO), Air Force Research Laboratory (AFRL), Department of Energy (DOE), National Science Foundation (NSF), Office of Naval Research (ONR), the Boeing Company, and the Mobile Manufacturer’s Forum (MMF). His research interests include conformal antennas, meta-materials and metasurfaces, reconfigurable antennas, wireless power transfer, and wireless sensors.