When natural disasters take out electrical power, utilities scramble to fix the problem. In many cases, people have to live without power for days, weeks or even months – witness the devastation in Puerto Rico brought by Hurricane Maria.

But what if power could be restored much sooner, like the flipping of a switch?

We’ve known that global integration of electrical grids is possible, but we hadn’t figured out how it could be done. Through this new research collaboration, we will plan for future power failures.

Researcher Andrea Benigni, electrical engineering, at the University of South Carolina’s College of Engineering and Computing is helping lead ground-breaking research with the U.S. Department of Energy’s Idaho National Laboratory (INL) and National Renewable Energy Laboratory. It focuses on the global integration of electrical grids to eliminate large-scale blackouts.

“We’ve known that global integration of electrical grids is possible, but we hadn’t figured out how it could be done,” Benigni says. “Through this new research collaboration, we will plan for future power failures.”

The Integrated Grids Laboratory (InteGraL) at the college, led by Benigni, is now part of something called the Real-Time Super Lab. USC joins Sandia National Laboratory, Colorado State University, Washington State University, Germany’s RWTH Aachen University and Italy’s Polytechnic University of Turin to explore the idea that electrons can be sent around the world the same way as digital packets of zeros and ones over the Internet.

The Super Lab complements other research activities in which USC is currently participating. These include the National Science Foundation Industry/University Cooperative Research Center on GRid-connected Advanced Power Electronics Systems (GRAPES) and the Electric Ship Research and Development Consortium.

The test case for the USC portion of the Super Lab demonstration was first developed for a GRAPES project about solar energy integration in power systems, for which USC received $130,000 of funding.

In September, the researchers gave a live demonstration at INL of the Real-Time Super Lab to study how electricity could be sent to different global locations to solve power problems. The ultimate goal is to prevent large-scale blackouts by moving electricity intercontinentally. This would help prepare the U.S. for power system challenges in the future while reducing the cost of outages. The process would be the same as when utilities move power regionally, but on a much larger scale.

Benigni and Herbert Ginn, electrical engineering, worked together to connect the InteGraL and Energy Routing labs at USC to complete the simulation.

“Even if the exchange of energy between Europe and the U.S. is hard to imagine in the immediate future, the simulation infrastructure developed as part of this project will enable a new class of research studies that could dramatically improve the reliability and resilience of how we operate our national grid,” Benigni says.

Benigni and graduate research assistant, Yan Chen, say one of the biggest problems with such a large-scale power distribution is the ability of the generators to hold all the necessary power. Distributed generation allows for the power to flow backwards, which can create instabilities. USC’s part in the global project is to discover how to control the energy generated by distributed renewable sources, such as solar cells.

Moving electricity around the globe without latency issues – like those that cause cellphone echoes and delays – is a goal the researchers want to reach. Moreover, long-term sustainability, reliability and affordability will save money on infrastructure and energy consumption while preventing large-scale power outages in regions around the world. 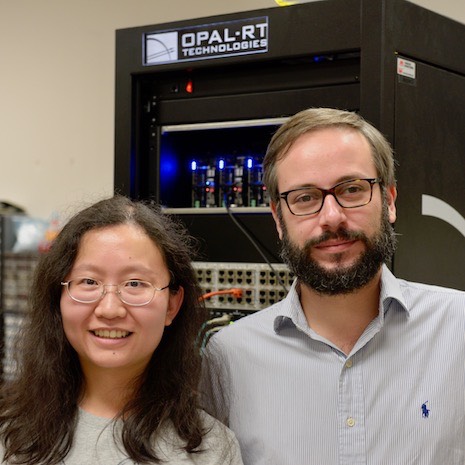