As Kevin Gagnon sat at his laptop in early March skimming through his flooded email inbox, his eye was caught by a phrase of interest in a passing subject line. He paused, clicked, and forever changed the course of his undergraduate career at the University of South Carolina.

That email, titled “Interdisciplinary Innovations in Healthcare Workshop,” brought him to the Innovation Think Tank Lab’s first workshop where he met Jack Gabel and Meredith Noble. In just two days, the three of them teamed up to formulate the workshop’s winning idea ­– creating a cellphone app capable of determining whether a person is having a stroke. Now, that same idea is bringing them to Erlangen, Germany, where they hope to take top prize at the Siemens Healthineers Innovation Think Tank’s annual external exhibition (eITT 2019) on July 11.

“I never thought that this is where the workshop at the UofSC ITT lab would take me,” says Gagnon, a junior studying computer science in the College of Engineering and Computing. “The fact that we were given this opportunity to go to Germany just blows my mind every time I think about it. Like, it’s insane, it’s ridiculous and crazy!”

In Germany, the team will be showcasing their project, “F.A.S.T. – Stroke Treatment and The Healthcare of Tomorrow with Siemens.” The idea still hails from their first workshop at the ITT Lab. But, in the months since, it has evolved from a novel concept to an informed, practical and applicable project on the brink of development.

Two mentors have helped the team’s idea evolve. Benjamin Schooley, an associate professor in the CEC’s department of integrated information technology, has helped them with the technical aspects of their app. He advised them on incorporating facial recognition technology into their idea, helped them find solutions to problems such as app security and prepared them for future integration into app stores.

Nick Patel, the chief digital executive at Prisma Health, provided the team with medical guidance. He helped them understand the biology behind strokes and the steps to identifying if someone is having a stroke, while also recommending how their app could work hand-in-hand with the medical community. Now, the team is looking forward to receiving advice from the diverse group of thinkers that awaits them in Germany.

“There will be students from Mexico, China, Brazil, Austria, even the United States,” says Dilek Akgun, the director of operations at the UofSC ITT Lab who worked closely with the team while they prepared their proposal to eITT 2019. “This will give them a great international environment. They will get to see what other parties do.”

The team, though, is just amazed with the situation they find themselves in. Five months ago, the three students didn’t know each other, they didn’t know of the UofSC ITT Lab, and traveling to Germany was the furthest thing from their mind. Now, they are backed by Siemens ­– one of the biggest companies in healthcare – and are presenting at an international competition.

“I’m going into it with an open mind,” Gagnon says. “I want to go with my best foot forward and present a really cool thing. Whether or not we win – to me it’s not as much a competition as it is developing a really cool piece of software that will help healthcare improve for everyone.”

After a few more tempered thoughts and a long pause, though, he adds with a smile, “You know, if we do walk away with a win from this, that would be pretty great.” 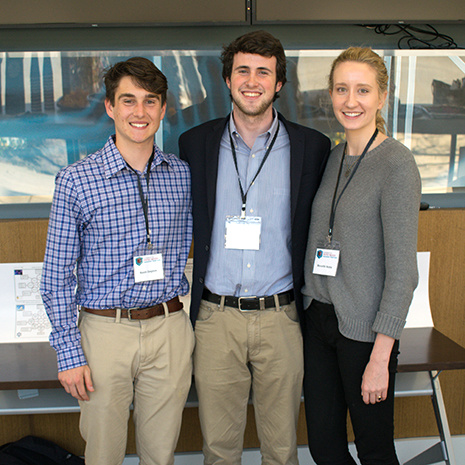 Photos from the ITT's first workshop!

Do you want to see where this team's journey all began?